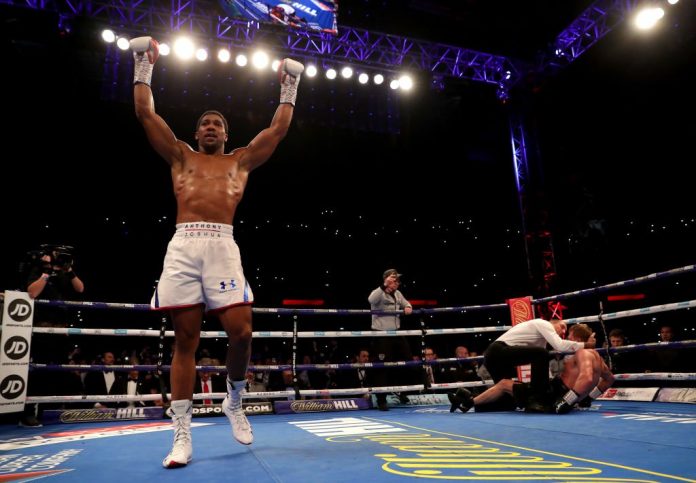 The Nigerian-born British boxer knocked out Povetkin in the seventh round after a shaky start to the bout.

The win was Joshua’s 22nd with 21 of them coming as knockouts.

The 28 year old boxer however admitted that Povetkin was a tough challenger.

“Alexander Povetkin is a very tough challenger he proved that tonight. I came here to have fun, do what I have done in the gym, he was strong to the head but weak to the body it could have taken seven, nine or 12 rounds to get him out of there,” Joshua told the BBC after his win.

“Tonight is out of the way let’s figure out what’s happening on April 13. Let’s put a vote out there.:

“There are no mandatory challengers? Who do we want to fight? Anyone is welcome. The sport is about what the fans want, but some times we have to face the mandatories.”

He also explained why a fight against Deontay Wilder has not happened.

“We both did a lot of talking, I’m here now, I had a good fight, have my knockout streak back.”

“There is a lot of pressure the whole country is rooting for us. The energy in here spurs you on and you do feel that pressure, I’m not going to lie. A few years ago maybe I wouldn’t have won the fight.”

Joshua is billed for another fight on the 13th of April 2019.