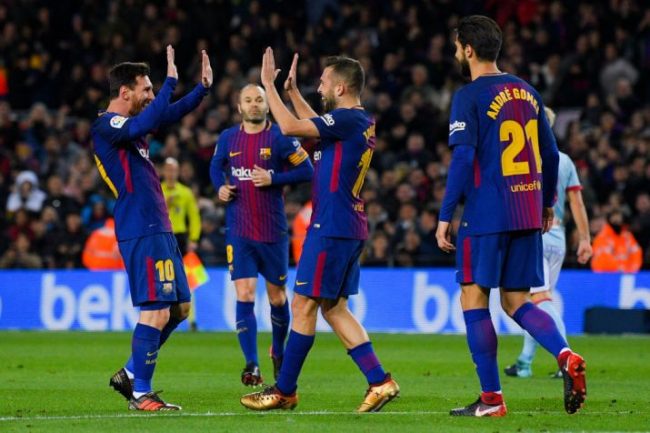 Barça boast a 100 per cent record and host Girona, while Atletico Madrid hope to make up lost ground at Getafe

The fifth round of action in Spain’s La Liga is set to get underway this coming weekend, with Barcelona looking to extend their two point advantage at the top of the table. The defending league champions welcome Girona to Camp Nou in round five, while Diego Simeone’s Atletico Madrid look to find their groove away to in-form Getafe.

Before you go any further, head on over to the Oddsshark website, find your favourite betting site and get your own account up and running using your credit card. As a new customer and with the La Liga season already well underway, there should be a wide range of promotions and special offers available to you.

First up, newly promoted Huesca host Real Sociedad on the Friday night (21 September). Neither side comes into this match in good form, with both teams having lost their previous two league encounters.

The two have identical records, having won on the opening day and not since, and there looks to be very little to split these two teams on recent form. Huesca leaked eight goals against Barcelona and then lost at home to Rayo Vallecano last time out – morale cannot be high in their camp right now.

Despite a poor run of form themselves, it is visitors Real Sociedad who come in as favourites to take the points. You can more than double your money by backing Real to win on the road at 2.15, with home side Huesca out at 3.50 to do the same – a draw coming in slightly lower, at 3.40.

There is no doubt however, that Real have the more technically gifted squad, and a 2-1 win for the visitors is priced competitively at 9.00. You could also come close to doubling your money by backing over 2.5 goals in the game at a price of 1.95, according to Oddsshark.

Atletico look to build momentum on the road

The following day, Atletico Madrid will look to build on their Champions League win away to Monaco on the road at Getafe. Atletico’s early season form has been disappointing to say the least, with coach Diego Simeone’s side managing just one win from their opening four league matches.

Getafe, by way of comparison, come into this one riding high. They are undefeated in their last three matches, have not conceded a goal in that time and in their most recent match beat Sevilla 2-0 away from home.

Nevertheless, they come into this match as the underdogs. Despite some poor form Atletico are at just 1.90 to pick up their second league win of the season, with Getafe at 4.33 to take the points in front of their own fans – a draw is priced in the middle, at 3.20, but this should be Atletico’s day.

A 2-0 win for the visitors comes in at 7.50, meaning that a US$5 bet would lead to a US$37.50 pay out. Diego Costa, who scored the winner against Monaco this past week in the Champions League, is at 3.00 to get on the score sheet on this occasion.

Barcelona can extend advantage at the top

And finally, league leaders, and defending champions, Barcelona will be looking to extend their advantage at the top of the table when they take on Girona on Sunday afternoon at Camp Nou. Barça are the only team to still boast a 100 per cent record after four rounds, and have already scored a whopping 14 goals at a rate of 3.5 goals per game – although it should also be pointed out that eight of those goals did come in the same match, against Huesca.

Girona, meanwhile, have started the season brightly, having won two of their first four league encounters to sit sixth. Last time out, they beat a highly rated Celta Vigo outfit 3-2 and can head to Camp Nou with their heads held high.

Nevertheless, it is Barcelona who come into this match as the clear favourites to make it five wins out of five to start the season. The champions are at just 1.083 to wrap up the points while Girona, to give you some idea of the task at hand, are at 21.00 to record a shock win.

This would appear to be a case of how many Barcelona score. They thrashed PSV 4-0 in the Champions League in midweek, and you can back them to win by the same score line here at a price of 7.50.

Ndidi Scores To Rescue Point For Leicester, Iheanacho Subbed Off In...