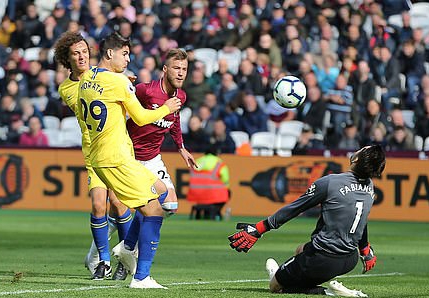 By Johnny Edward:
Former Nigerian winger, Victor Moses was an unused substitute for Chelsea who dropped their first points in the English Premier League on Sunday with a goalless away at West Ham at London Stadium, reports Completesportsnigeria.com.

Both teams had several chances in the first half, but neither could find a way through.

After a goalless first half, a tired Chelsea missed a chance to take the lead after David Luiz’s free header sailed over Lukas Fabianski’s crossbar.

Chelsea dominated the closing stages but West Ham who created slim chances failed to lead when Andriy Yarmolenko missed a chance after he could not glide his header through on goal off a Robert Snodgrass cross from six yards out.

N’golo Kante also had a chance to score from close range, but he skied his shot over the bar. Substitute Ross Barkley also was denied by Fabianski from 20-yard.

Willian also squandered a late chance from close range, and it left Chelsea having to make do with a share of the spoils against a West Ham side which has shown signs of improvement under Manuel Pellegrini after losing their opening four games which preceded their 3-1 win at Everton.