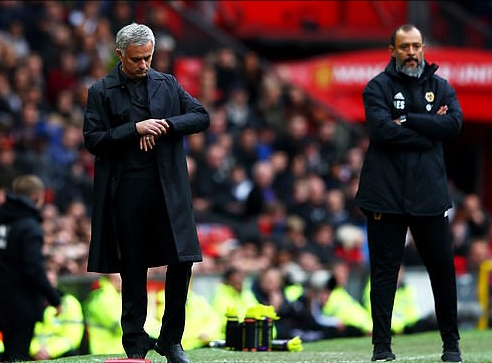 Manchester United manager, Jose Mourinho wass unhappy with his team’s attitude and also pointed the finger at his attacking players after the Red Devils’ 1-1 draw with Wolves at the Old Trafford on Saturday.

Fred gave the hosts the lead against the run of play in the 18th minute , but Joao Moutinho brought Wolves back on level terms early in the second period with a fine finish.

Clear-cut chances were hard to come by for United thereafter, and Mourinho was angered by the displays from the likes of Romelu Lukaku, Jesse Lingard and Alexis Sanchez.

“I think it’s a fair result. They deserve the point and I think we deserve the punishment of only one point,” Mourinho told Premier League productions after the game.

“They started better, more aggressive, more intense. I don’t know why, but they were more motivated and for 10, 15 minutes they showed the good team they are and were in control.

“We had a slow start in the second and they scored, then they defended with a lot of people.

“Honestly, I was expecting more from my attacking players. [There was] not enough creativity, movement, dynamism, so we made it quite easy for them to cope with our supremacy.

“Then we tried to go direct and cause some problems, but overall we don’t deserve more than this.

“[The performance] surprised me. You can see the way we conceded, the ball was lost in midfield. They [Wolves] were fresh as they didn’t play in midweek. We know how Moutinho and [Ruben] Neves play, they don’t give us much time to play. But honestly, our performance wasn’t consistent, dynamic, creative.”

Mourinho further reflected on the performance of his side in the game.

“I think Wolves, by the way they faced the game, they deserve it because they play like I like to play, which is like the World Cup final.

“That’s the attitude that I like my teams to have every match, and we didn’t have that. They had, we didn’t.

“The attitude made the difference. They were in the game since the first minute, they played every ball, every second in the maximum of their intensity, their desire, and we didn’t.

” Unless you are playing in such a weak league where you play against really weak opponents and then playing 20 per cent of potential is enough to win. That’s not the case, and we all know that.

The Portuguese introduced Juan Mata, Anthony Martial and Andreas Pereira from the bench in the final half-an-hour and all looked sharp, but the manager was in no mood to praise them.

“When they came on the score was the same, it didn’t change anything for the better,” Mourinho said of his substitutes.

“The improvement [towards the end] is natural, for home team to go stronger in last part of the game, but I think our attacking players weren’t creative enough.”