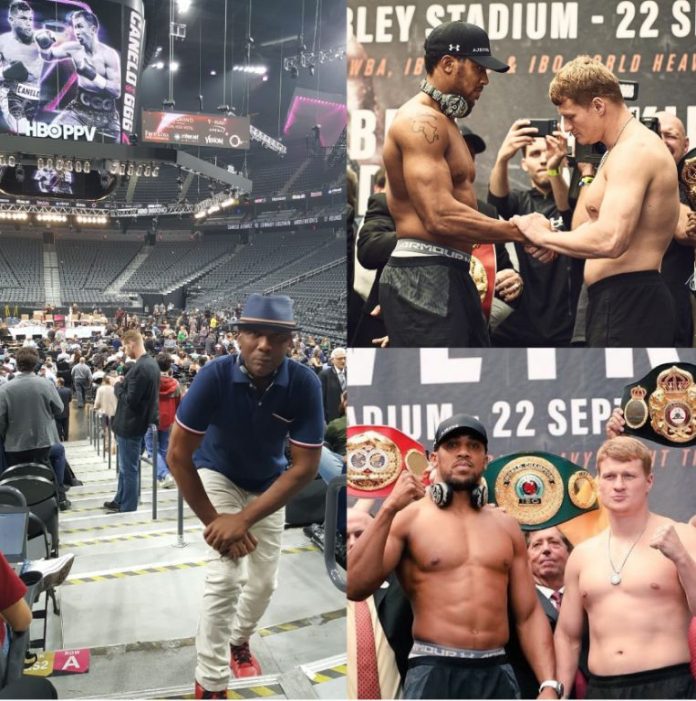 NNAMDI ‘NOLLYWOOD’ MOWETA: Thank you and it’s a pleasure.

Massive night for boxing on Saturday night. Anthony Joshua will be defending his WBA, WBO, IBF and IBO titles against the dangerous Alexander Povetkin. Can you quickly explain: why is Joshua putting all his belts on the line when Povetkin is the WBA mandatory challenger?

There is just no way that Anthony Joshua will step into the ring on Saturday night and only defend his WBA belt. It was important to have the IBF and the IBO belts – IBO belt don’t really mean nothing – but all the three belts on the table for this clash. So, mandatory fight for the WBA, yes the other two belts must be on the table. So winner tales all that’s what it comes down to on Saturday night at the Wembley in the UK.

There’s been no clash talking or drama between both men in the media, at press conferences or throughout the buildup, yet you get the impression that come Saturday, there will be blood. Its extraordinary how two men can seem so respectable in one minute, then unleash incredible violence on each other in the next?

Don’t forget that Alexander Povetkin could only speak Russian. He doesn’t speak English. If he speaks English it would have been a different thing. Povetkin comes across as a very calm dude but he is a dangerous puncher, you know. Go back to his last fight in March against David Price and he brutally knocked him out and had him on the floor. Him being calm and cool, Saturday night he will unleash on AJ and AJ better have a defense because the Russian is coming to take his belt. No clash talk because these are two classic guys. We don’t really need clash talk every time to sell tickets. When you already have almost 90 thousand people coming into Wembley Stadium, what do you need clash talk to sell tickets for? These are just two gentlemen, two classic dudes that are ready to rumble Saturday night at the Wembley.

Let’s talk about Povetkin. 38 years old, former WBA heavyweight champion, former Olympic gold medalist and with more knockouts than AJ has had in professional fights. Just how good is the Russian?

Alexander Povetkin is not a bad fighter. His only loss was to Wladimir Klitschko. so, he is a puncher and a puncher always have a puncher’s chance. So for example, AJ walks into the big right hand and he clips him on the jaw, AJ can be on the floor and the referee can count to a million and AJ will not be able to get up and all this big talk about Deontay Wilder will be out of the window. The Russian can fight but don’t forget that behind him, there are two failed drug tests which means he was bursted for steroids. So that is still a black cloud over his record and what he’s done in the game. But don’t take that away, he’s come clean and he’s not a bad fighter. He can punch, he will fight, he will not run and the style will be very good for the fans. The fans will enjoy this fight.

Interesting story about Povetkin. We hear he had some trouble with a sparring partner – Daniel Dubois, in his camp?

Yes, British heavyweight the boy all had him all marked up in camp which was a bad move by the Povetkin team. But don’t forget this is the same boy that had AJ on the floor in camp and I wonder why they keep inviting him to camp to beat up their heavyweights. That may have a little effect on him but it depends on how quickly he heals before Saturday. Bringing in young heavyweight to beat up your heavyweight in camp when your man is about to make at least 7m dollars may give you the bone-head awards to Povetkin people for bringing in Daniel Dubois to camp.

Joshua is 6ft 6″ tall while Povetkin is 6ft 2″. The Russian has fought taller fighters all through his career and annihilated almost all of them. I mean just look at what he did to David Price in his last fight. Surely this is his territory and this makes it a dangerous fight for AJ?

Perfectly, I agree with you. Alexander Povetkin is for tall guys. He knows how to go inside and fight staying inside, stay in the pocket, crack those ribs and then drop you. That’s why Anthony Joshua must have, not any jab, but a very stiff jab, he must have his combinations – he must bring his tool box to the ring which means uppercuts, left hooks, big right hand, overhand right hand – all these combinations must work Saturday night because if he allows Povetkin to get past the left jabs and stay inside, then Joshua may find himself in deep trouble with the body shots because nobody is been able to get inside and work AJ’s body. If Povetkin is able to go past the jabs and stay inside and run his combination, we may be in for a big shock come Saturday night. Joshua is 6,6′, Povetkin is 6′ 2′, there is no way in the world that AJ can come down to Povetkin level and start jabbing with him, toying with him and let him come inside. He must take the fight to Povetkin with some serious jabs and combinations, back Povetkin up, push him back, put him on the ropes and run his combinations. But if he brings it down on his heights, like what he did with Carlos Takam and he cannot adjust to what he finds on the rings on Saturday night, then we are all going to be in trouble.

You said a moment ago that Povetkin is earning $7million. How much is AJ gonna earn?

Anthony Joshua is guaranteed 25 million dollars. Remember, this is the first deal with Dazn which we call Dazon in America – they gave Eddie Hearn loads of money so that’s why in America, we can’t watch this fight on show time or watch it like we used to. The fan base for AJ in America will feel it because nobody is ready to pay 9 or 10 dollars to Dazn to see this fight. So for the money, 25 million dollars for AJ plus all the stuff, so home boy may walk away with close to 30 million dollars. For the Russian is 7 million dollars and if you add TV rights from Russia and all, he may walk away with close to 9 million dollars, so it’s no chicken change for these two heavyweights. But they better deliver action on Saturday night because after what Canelo and Tripple G did in Las Vegas last Saturday night, we better see a real rumble of heavyweights. Somebody is on the floor trying to get up, the referee counting – I hope not with AJ – because there is no reason why for AJ to be on the floor. For this fight we must see action, we must see somebody on the floor, we must see hooks, big right hands and uppercuts – the we have a good fight on Saturday night.

Anthony Joshua. In less than 10 rounds, he must – I’m talking about bringing his boxing tools into the rings Saturday night. Stiff jabs, combinations, uppercuts, big right hands – if all these land Saturday night, AJ in less than 10 rounds will defend his belt and go home the champion. Povetkin, all he needs to do is just stay inside, don’t get outside and don’t let the jabs touch him. If he can stay away from the jabs, moves his head, with lots of head and body movements, stay very mobile and be inside and give AJ angles, he may come out victorious. But I don’t see that happening because AJ will be on top of him, push him back and stay in the body. And stay in the body means all the shots must be landing. So the puncher will take it Saturday night and the biggest puncher among the two is Joshua in less than 10 rounds. But if he makes a silly mistake, a very silly mistake, he may find himself on the floor. And we better don’t see Anthony Joshua on the floor because if we see him on the floor, we will laugh at him and then question if he is in any position to take on Deontay Wilder.

Thank you once again for your time.

You can listen to the audio version of this interview on SPORTS PLANET PODCAST, your premium news and magazine sports show produced by COMPLETE SPORTS STUDIOS. Go to
www.completesportsnigeria.com and click on the “RADIO” link to listen.

Messi Is A GOAT – Reactions After Bayern Munich Trash Barca...