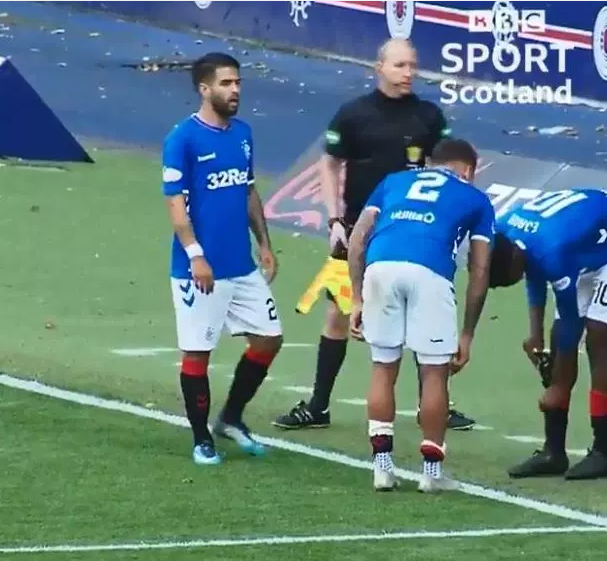 Footballer of Nigerian descent Ovie Ejaria wasn’t quite as prepared as he should have been when appearing off the bench for Rangers at the weekend. Steven Gerrard called for the Liverpool loanee in the 56th minute of the Gers’ 5-1 thrashing of St Johnstone.

As the man he was replacing, James Tavernier, trotted over to the touchline, Ejaria went through some last-minute stretches.

It was captain Tavernier who pointed out to the 20-year-old that he was missing a pair of essentials – his shinpads.

With Gerrard keen for the substitution to happen, there was only one thing for it.

Tavernier rolled down his socks, and pulled off his shinpads to give to Ejaria.

With a pat on his back from the gaffer, Ejaria ran onto the pitch

Tavernier was the man who led Gerrard’s side on a victory march, receiving a standing ovation as he was substituted in the second half with a slight knock.

By then the skipper had scored the first goal and set up the second in an stunning performance which saw Alfredo Morelos, Scott Arfield, Kyle Lafferty and Daniel Candeias hit the net.

Liverpool won 5-1 over St Johnstone as Steven Gerrard’s men moved up to second place in the Scottish league and one point ahead of Celtic. Man Compares Magician Who ‘Walks In The Air’ To Jesus (Photos)