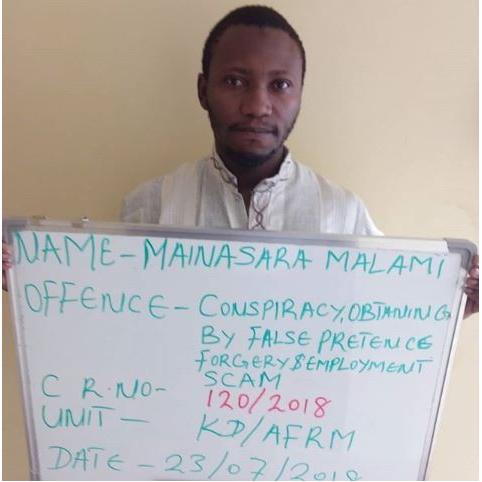 The Kaduna zonal office of EFCC has arraigned the duo of Mainasara Malami and Emmanuel Salihu (both staff of the Nigerian Security and Civil Defence Corps) before Justice Umar Dogon Daji on a two count charge bordering on conspiracy and obtaining money under false pretence.

The accused pleaded not guilty, prompting prosecuting counsel, Sa’ad Hannafi Sa’ad to request for a date for commencement of trial while praying for the remanded of the defendants in prison custody pending hearing of their bail applications.

Attempt by the defence counsel to move an oral application for bail of the accused persons was refused by Justice Dogon Daji, who insisted on formal bail applications by the accused.

Justice Dogon Daji thereafter remanded the accused in prison custody and adjourned the matter to October 8, 2018 for hearing of bail applications and commencement of trial.

The defendants allegedly  obtained  the sum of N2,750,000.00 (Two Million Seven Hundred and Fifty Thousand Naira) from unsuspecting members of the public in the guise of helping them secure employment with the NSCDC.

Count two of the charge reads “That you Mainasara Malami and Emmanuel Salihu sometime in October, 2017 in Sokoto within the Judicial Division of the High Court of Sokoto State with intent to defraud obtained the total sum of N2,750,000.00 from some members of the public under false pretence of securing employment with the Nigerian Security and Civil Defence Corps, which you knew to be false and you thereby committed an offence contrary to Section 1(1)(a) of the Advance Fee Fraud and Other Fraud Related Offences Act, 2006 and punishable under Section 1(3) of the same Act”.

Teen Turned In By Mom After He Molested 50 Kids