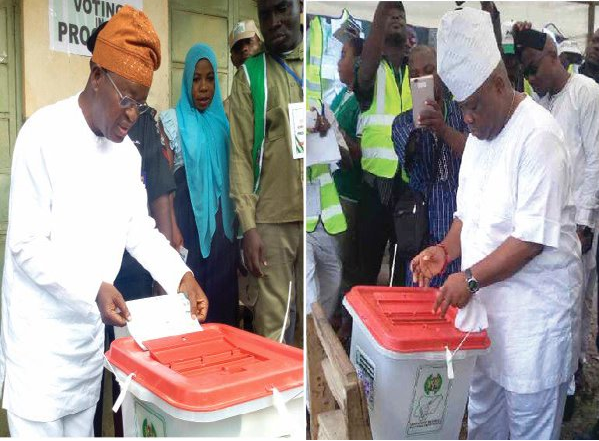 Oyetola had the upper hand in 13 of the 30 local government areas, according to results handed over to party agents at the various polling stations by INEC.

Adeleke trailed in the second position after winning in 11 LGAs while Senator Iyiola Omisore of the Social Democratic Party (SDP) was the preferred candidate in only four LGAs.

The official result is to be released by INEC.

Each of the leading candidates won in his unit and local government area.

Oyetola won in Boripe, Adeleke in Ede, Omisore in Ile Ife and Adeoti in Iwo.

It was however a bad outing for Prince Olagunsoye Oyinlola, a former governor of the State and the prime mover of the Olusegun Obasanjo-inspired African Democratic Party’s (ADC) candidate, Alhaji  Fatai Akinbade, lost in Oyinlola’s ward at Okuku.

Moment after the close of voting yesterday, the Ademola Adeleke Campaign Organisation issued a statement warning against manipulation of the results of the poll.

The will of the people must be respected, it said in the statement by its Director of Publicity, Mr. Olawale Rasheed.

He said: “as results are been collated across the state, we demand utmost fair play and transparency from the electoral body.

“We are watching and monitoring closely. Under no circumstance should the collation process be manipulated.

“Our agents and leaders are on their toes armed with relevant results and forms. The will of the people must be respected.

“We task INEC and security agencies to obey the directive of President Muhammad Buhari who had ordered that the Osun electoral process should never be manipulated by federal or any related agencies.

“We call on local and international observers to take note of the ongoing process and assist the people of Osun state to realise the supremacy of their electoral will.

“Our people should also be ever vigilant to protect their votes and their aspirations for better life.”

Voters’ turn out for the election was generally high across the state.

Security was also tight to discourage disruption of the election and to apprehend violators of the electoral process.

In Osogbo, the state capital, many of the residents had trooped to their polling units as early as 6.am.

The News Agency of Nigeria (NAN) said more than 300 voters were on the queue  at Osunbukola Ward 10 Unit 003 Polling Unit in Egbedore LGA by the time voting got underway.

There were also some policemen and NSCDC personnel at the polling unit.

The Accreditation Officer at the unit, Mashood Samson, said  the exercise was hitch-free with the card readers working perfectly.