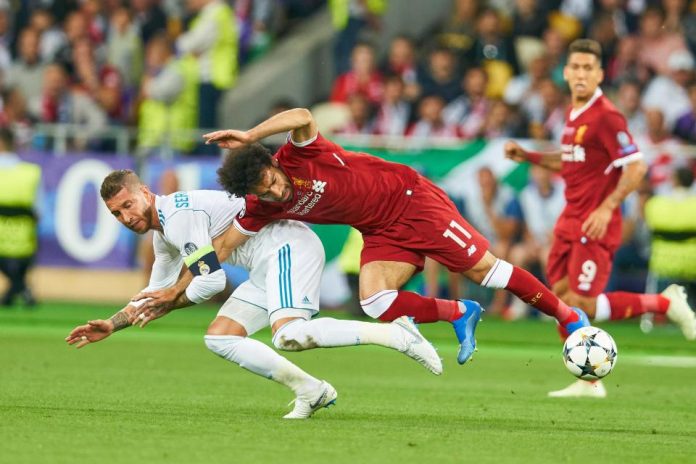 Real Madrid were happy to let two Liverpool players have the ball in May’s Champions League final, as footage of their pre-match teamtalk has revealed.

Sergio Ramos , Dani Carvajal and Luka Modric were filmed chatting in the Kiev dressing room as they received massages prior to taking on the Reds, with Carvajal urging them to “be close to their three forwards” during the game.

Ramos famously was close to Mo Salah of course , with his first half challenge on the Egyptian injuring his shoulder and forcing him out of the match.

In the conversation between Carvajal and Modric, it was learnt that Real Madrid were happy to let Liverpool’s full-backs Andrew Robertson and Trent Alexander-Arnold have possession.

Real won the match 3-1 thanks to a brace from Gareth Bale and a Karim Benzema strike, with two dreadful errors from Loris Karius the main memory of the evening, more so that Sadio Mane’s consolation.

Carvajal: “We have to put a lot of pressure on them. They get the ball back and combine fast.

Carvajal: “We have to put a lot of pressure on them. They get the ball back and combine fast.  “If we can stop that, and be close to their three forwards, and boom. Quickly. They try to get out of the pressure? We have to be there. “If they keep it, fine. Let’s keep them 40 metres away.

Ramos: “We have to avoid silly fouls on the sides. They are very strong in the air. We’ll get them in the counter attack. “Same thing with the second chances. We have to communicate well all the time. “In every ball they clear, we have to keep our mark until the end.”

Carvajal: “If their full backs go way up, you can’t chase them all the time. Because by minute 60 you’ll be dead.”

Modric: “Let’s pick our battles. Just like we did against Juventus , you know? We played the same way, and they did too. Let their full-backs have the ball.”

Carvajal: “Yes. Exactly. We just let them have it there.”