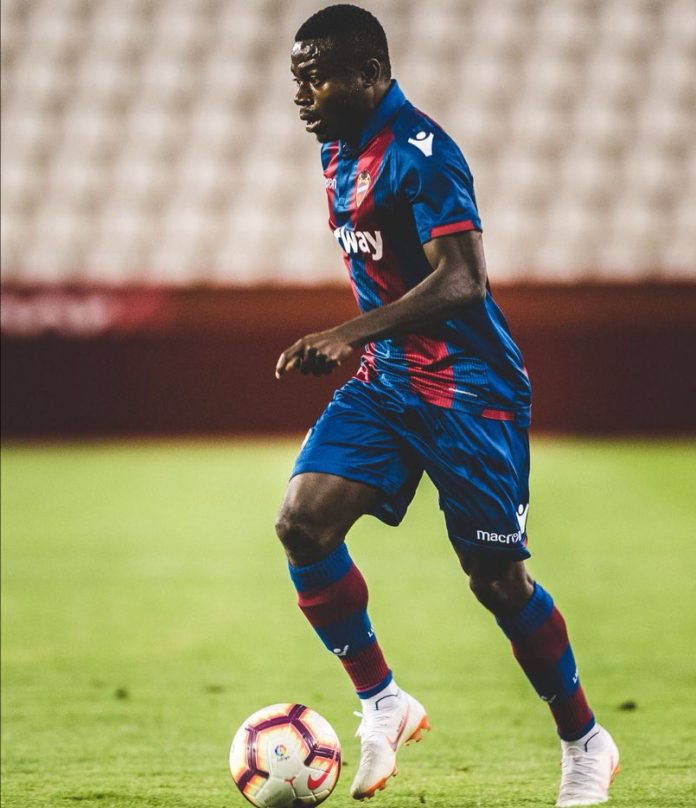 The Nigeria international came on for Jose Campana in the 73rd minute of the defeat. Simon had missed his side’s last five games due to injury.

At the Stade du Roudourou in Guingamp France, Super Eagles winger Samuel Kalu played for 76 minutes for Girondins Bordeaux who defeated Guingamp 3-1 in a French Ligue 1 clash on Sunday. Kalu who scored his first French Ligue 1 goal of the season last weekend was replaced by Yann Karamoh in his fifth appearance of the season since he joined the club from Belgian side, KAA Gent in the summer. The 21 year old has scored one Ligue 1 goal so far.

In the Italian Serie A, former national U-17 and U20 midfielder, Orji Okonkwo came on for Diego Falcinelli in the 67th minutes for Bologna who spanked AS Roma 2-0 at home on Sunday. It was his third substitute appearance in four games this season.

In Germany, Nigerian striker Anthony Ujah made his 90th Bundesliga appearance when he came on as a 76th minute substitute for Pierre Kunde in FSV Mainz’s 1-0 loss away to Bayer Leverkusen on Sunday. The game was Ujah’s third substitute appearance this season for Mainz.

In the Bundesliga 2, Super Eagles fringe defender, Jamilu Collins made his eight league appearance for Paderborn who played a pulsating 4-4 draw at home to FC Magdeburg on Sunday. He was on for the entire duration of the encounter.

Henry Onyekuru failed to score in his second straight game for Galatasaray who lost 3-0 to Akhisar Bld Spor on Sunday in the Turkish Super Lig. Onyekuru who was on for the entire duration of the encounter has made six appearances and has scored twice.

Emem Eduok was also subbed on in the 70th minute for Kasimpasa who lost 2-1 at home to Alanyaspor. Eduok has played six times and scored once this season.

In Scotland, Ovie Ejaria came on for James Tavernier in the 56th minute as Rangers pummeled St.Johnstone 5-1 at the Ibrox Stadium on Sunday. His compatriot, Umar Sadiq was not listed for the encounter.

Nigerian pair of Adeleke Akinyemi and Afeez Aremu started IK Start’s 2-1 away win at Bodoe/Glimt on Sunday in Norway. They were replaced in the 59th and 83rd minute respectively.

The 20 year old Akinyemi who has scored once this term in five appearances for IK Start was replaced by Mathias Bringaker while Aremu was subbed off for Adnan Hadzic six minutes from time. Aremu has made 21 starts this season for IK Start scoring three goals.