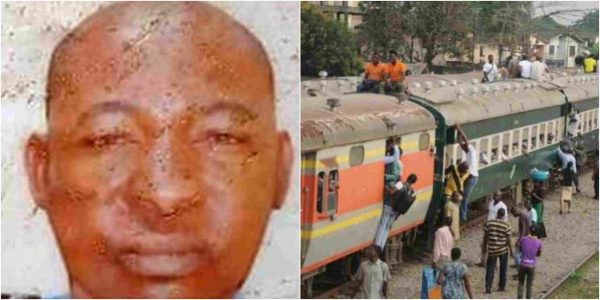 A police inspector, Philip Kolo, who was attached to the Inspector-General of Police Monitoring Unit Strike Team, Force Headquarters, Abuja, and a yet-to-be-identified commercial motorcycle rider, lost their lives on Wednesday in a train crash around PWD bus stop, Ikeja, Lagos State.

PUNCH Metro gathered that Kolo was on his way to Ikeja on the motorcycle around 10.30am when the incident happened.

The rider had reportedly attempted to beat the oncoming train and cross the rail track when they were trapped and crushed to death.

Our correspondents learnt that Kolo was based in Abuja and was on an official assignment with his team members in Lagos.

A source told PUNCH Metro that the train had been blaring from a distance, which made other road users to stay off its track.

It was said that passersby had cautioned the motorcycle rider to wait, but he resisted the warning in a desperate attempt to beat the train.

The source said, “When we went to the scene, we found the policeman’s identification card, but there was nothing with which we could identify the rider. As we were there, some policemen on patrol came around and confirmed the identity of the policeman. They later removed the bodies.”

A police source, who spoke with one of our correspondents, said Kolo came from Abuja for an investigation in Lagos.

He said, “Kolo’s team members were waiting for him when they got the sad news. The motorcyclist carried him from a hotel in the Agege area where he lodged. The motorcyclist always picked him whenever he was around.”

An official of the Lagos State Traffic Management Authority said the incident happened around 10.30am.

He said, “The motorcycle rider was coming from the Lagos-Abeokuta Expressway and wanted to enter the Ikeja GRA. He was probably thinking he could beat the train, which dragged them along the track.

“We were called immediately it happened and we got there about five minutes later. We found the shoes of the men and some parts of the motorcycle scattered around the bush. The deceased were dismembered. We called officials of the State Environmental Health Monitoring Unit, who brought an ambulance to remove the bodies.”

The Police Public Relations Officer, CSP Chike Oti, said the corpses had been deposited in the Lagos Mainland Hospital mortuary.

He said, “The policeman was in Lagos for an investigation and was being conveyed from Agege to Ikeja when the motorcycle he was on was hit by the train. His corpse has been deposited in the mortuary for autopsy.”

Ladies, What would you say to this wedding dress?