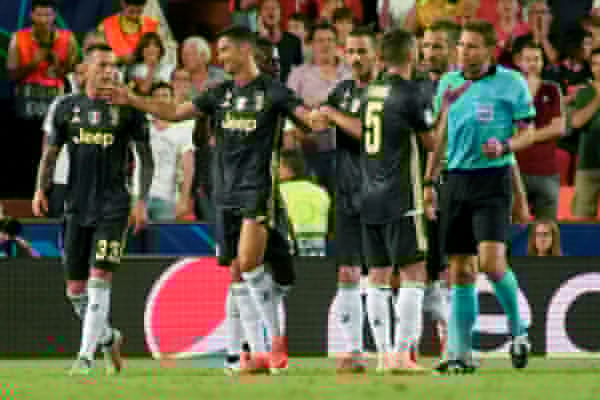 Cristiano Ronaldo was sent off in his maiden Champions League appearance for Juventus who recorded a 2-0 away win against Valencia at the Estadio Mestalla, Valencia on Wednesday.

Ronaldo was sent off a minute before the half hour mark and will likely miss the Old Lady’s next three games in the competition.

Bosnian midfielder, Miralem Pjanic scored both goals for Juventus from the penalty spot.

At the Etihad Stadium, Manchester, Manchester City suffered a shocking 2-1 defeat to French side, Olympic Lyon in their Group F encounter.

Gnaly Cornet and Nabil Fekir put the visitors ahead in the 26th and 43rd minutes respectively. Bernardo Silva reduced the deficit for the hosts in the 67th minute.

In a Group H encounter, Manchester United recorded an emphatic 3-0 away win against Swiss club, Young Boys at the Stade de Suisse, Bern.

Paul Pogba scored a brace for the Red Devils with Antonio Martial scoring the other goal.

Former Nigeria U-23 international, Moses Ubong was left on the bench for the entire 90 minutes in Czech club, Viktoria Plzen’s 2-1 win against CSKA Moscow of Russia in a Group H clash.

Michal Kremencik scored both goals for Viktoria Plzen, Fedor Chalov was on target for CSKA in the clash.

Also in Group H, Real Madrid thrashed AS Roma 3-0 at the Santiago Bernabeu with Isco, Gareth Bale and Marian Diaz getting the goals.

Robert Lewandowski and Renato Sanches both hit the target as Bayern Munich beat Benfica on the road.