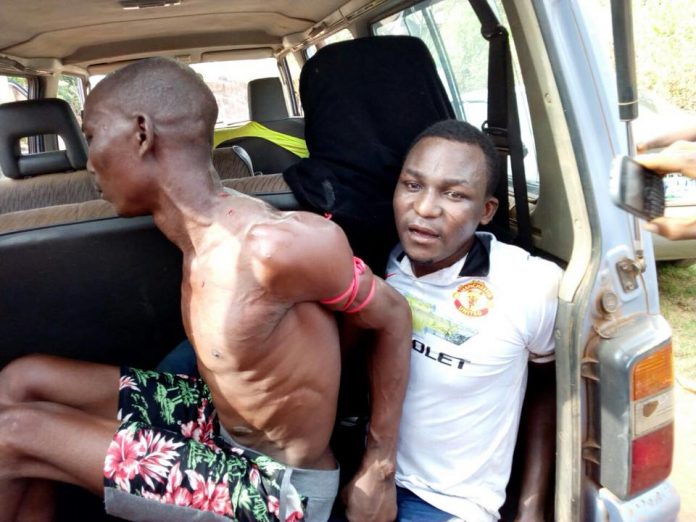 A Nigerian man based in Cardiff, the capital city of Wales, has taken to social media to reveal his disappointment with the Nigeria Police force following a robbery at his house in Nkwerre, Imo state. In a lengthy piece posted on Wednesday, September 19th (yesterday), Chin Akano, revealed how some of the thieves who burgled his home are now free, no thanks to the police.

Nigeria is a finished country and i doubt if any president can save it. There are certain things i see as someone who lives where things are done properly and my heart bleeds profusely. Long RANT:

Late 2016 my home in Nkwerre was massively burgled by Hausa people in connivance with my Hausa security man and police were called in. Sadly police could not do anything. They could not do jack. They were interested in how to make money off my predicament. Out of frustration and not being around, i handed the matter to Nkwerre Vigilante who swung into action, found the criminals and took them to the police. I put pressure and police took them to court and they were remanded. DPO of the police station had to call me to send money to transport these criminals to Owerri from Nkwerre.

He told me they needed to hire a vehicle. I sent money. This DPO who has now been transferred away from Nkwerre did so much to deceive me. Each time i asked him the adjourned date for the case , he would tell me no date and a wrong date. I did not know who the IPO was , neither did i know who the prosecutor was. So what happened was that each time the case was called up, the complainant (me) or his representative was not in court. The magistrate was at the verge of striking out the case, if not that i decided to send someone to the court to find out the actual hearing date and appeared in person. Clearly this DPO was compromised and i would prove it to him, should the need arise.

Every aspect of the investigation, i parted with money. Each time a hearing is fixed, i have to give money to the court to send someone to Owerri to notify the prison authorities to bring the suspects to court. Sometimes i would send money to transport the hoodlums from Owerri prison to the Court in Nkwerre. If i did not give money, they will not appear in court and case will be adjourned.

Then these criminals were granted bail. These were Hausa boys who damaged my house terribly and carted away properties worth several millions of Naira. They were granted bail by a court and the guarantor (surety) was another hausa man whose address was not verrified by the court. The first accused who admitted participating in the crime and explained how they did it and where my properties were, was granted bail and his surety was a fulani herdsman i would say. Of course this man jumped bail and never returned and his name was struck out of the case. Before then the ring leader was never arrested because Noah was said to have ran to Sokoto and police wanted me to fund their journey to Sokoto to look for him. SMH.

The penultimate hearing, i had a serious altercation with the Magistrate who got so irate that she threatened to deal with me , if i did not stop disrespecting her court. Maybe she would have remanded me for contempt of her court. I told her that her court was non-diligent for granting a criminal who has accepted such a crime bail without ensuring that his surety is well known and address verified.
The Police man prosecuting the case for the police is a totally different matter. Very dishonest. When he was asked to look for the escaped suspect or his suerty, he asked me for money which i gave. He just diverted the money and did nothing. When i asked him about the surety, he said he did not find him and that he wandered all the nook and cranny of Anara in Mbano looking for the surety. Anara i asked, he said yes. Little did he know that i had found out that the surety’s documented address was 5 minutes walk from his police station ( Okwu in Nkwerre) which is no where near where he said he was wandering about. So sad and pathetic. Heads must roll after this case. Surely.

Case is still progressing and anyone that is called to give his prosecution testimonies ( witness), I am asked to pay them. Now its the turn of the IPO to give his own account ( testimony). Prosecutor told me that i needed to pay the IPO before he would come. Meanwhile the police station is a minute walk from the court. I gave a few thousands reluctantly and after vehement protest. Next hearing, where is the IPO , i asked.

Prosecutor said that the person he thought was the IPO said he wasn’t. This was the response of a trained police officer prosecuting a criminal offence of this magnitude. What then, i asked?. He said the actual IPO was on transfer and he would need to be signalled to come, also at my expense. If i insisted that they did the job they are being paid for, case will stall and be struck out. I had to part with money again.

Last last i decided to engage a lawyer to sit in for me and follow things through. The case is ongoing now as i type and i am in far away UK hoping that the witnesses paid appeared in court . In this UK, if you are a victim of crime, all you need do is report to police and they would work with you to prosecute. Victim will even get help and free professional counselling if necessary.
But back home, if you are a victim of crime and have no money, your case will die. I really weep for my country.