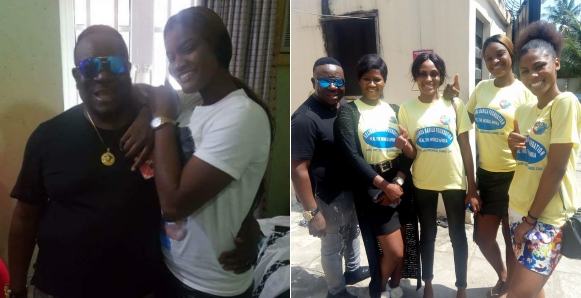 Following an accusation by a lady, weekend, that she had a one-night stand with John Okafor, popularly called Mr. Ibu, the comic actor has denied that he never had anything to do with the lady in question.

Recall that a lady identified as Igwe Gloria, set the social media agog after she took to a Facebook group, No CHILLS in NAIJA, to narrate her beautiful one-night stand experience with the actor.

Commenting on Mr. Ibu’s big tummy, the lady said she was not bothered as far as she got the money she deserved at the end of the day.

According to Gloria, “the level I am right now, two years from now none of you guys will get there even in your next life. I finally had a one-night stand with my Mr. Ibu.

“He is so cool, sweet and lovely. All celebrities have their own ways of having sex; they don’t rush it like all chewing gum guys we have here.

“He shift the pants gently, kiss you romantically and lastly insert it gently. OMG! Last night was wow! I felt on top of the world. His pot belle no be here ooo. But me I no send as far as money is involved.”

However, narrating his side of the story to Vanguard yesterday, Mr. Ibu denied having anything to do with the lady in question, saying he has never met her before now.

Ibu’s words: “The girl came to see her boyfriend, an Uber driver working with an American-based humanitarian worker, Belinda Babila, who was in the country to carry out some charity work.

“We were planning to visit an orphanage in FESTAC last Friday and the lady came to the hotel where the woman was lodging to see her boyfriend. Through her boyfriend, she approached me to take pictures with me.

“Later, the NGO Founder invited the lady to be part of the team that would visit the orphanage. At the orphanage home, we all took pictures and that was it. What happened next, I can’t explain.”

According to Ibu, “I didn’t even know that the lady in question is even married and she hails from Ebonyi State. Her husband is based in Enugu and they are planning for their traditional marriage, so that she can join her husband in Enugu.

“And here she is, dating an Uber driver, who made it possible for her to meet with me. It was later her husband called me and apologised, explaining that it was not his wife that made the post on the Facebook group.

“The girl in question also called me and was crying profusely that she never made such damaging post on social media. She swore with her marriage and her unborn child.

However, the comic actor said despite the negativity of the post, he cannot stop taking pictures with his fans, but will do so with caution.