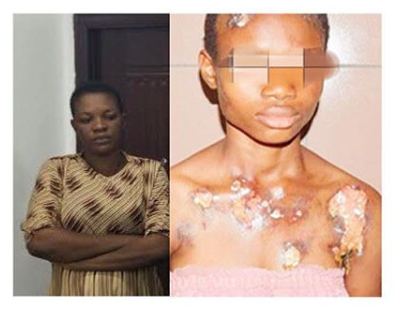 The National Agency for the Prohibition of Trafficking in Persons have effected the arrest of a 37-year-old mother of two, Ifeoma Obinwa, for allegedly inflicting wounds on her housemaid at her home in Dutse Alhaji, Abuja.

The victim, who has lived with Obinwa from Imo State, who claimed to be a health worker, since 2015, was not enrolled into school and is always being physically and emotionally abused. .

She is always being beaten by the suspect with sticks, wire and sharp objects and such treatment has left wounds and scars all over her body, including her head. .

The last incident that led to Obinwa’s arrest happened on September 12, 2018, after the suspect accused the victim of beating her child.

She then, allegedly, placed a knife on fire until it became very hot and then placed it on the victim’s thigh and buttocks, thereby leaving her with grievous body injuries. .

The victim was also left untreated until operatives of the agency rescued her.