Vice President Yemi Osinbajo paid a visit to the legendary Fela Anikulapo Kuti’s ‘New Afrikan shrine’ as the 2018 ‘Felabration wrapped up. While he was there, he prayed for those at the shrine in the presence of Femi Kuti who also publicly explained why he cannot support the Buhari led administration. Femi Kuti who headlined the Felabration event, revealed how Vice President Yemi Osinbajo appealed to him to support Buhari’s government, which he refused.

According to Femi Kuti, he can’t support Buhari’s government because of his father even though Vice President Yemi Osinbajo is his friend. His statement in the presence of the Nigerian Vice President and the crowd which turned up for the Felabration event, led to wild cheers. 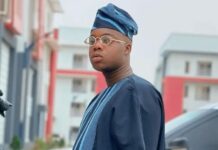 I have not slept since Lekki Toll Gate shooting – Burna...