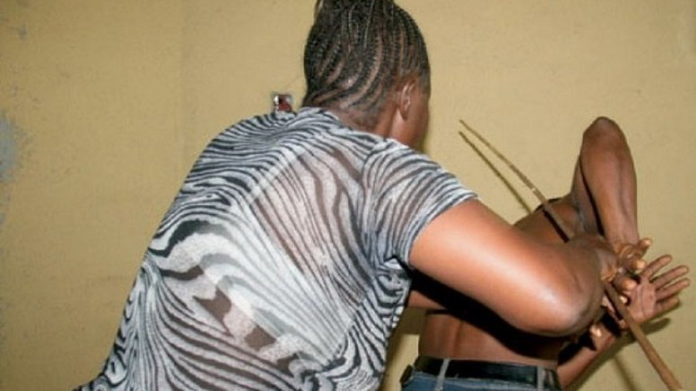 A 32-year-old woman, Chinwendu Chita has been remanded by an Ejigbo Magistrate Court for beating up her husband, Okechukwu Chita, over his inability to impregnate her.

Chinwendu said she has been married to her husband for some years, but he has been unable to impregnate her and has not shown any commitment for them to have a child.

Reports gathered that Chinwendu had constantly assaulted her husband since 2018 to the extent that Okechukwu became afraid to return to their matrimonial home.

It was also gathered that the Police at Ago Palace had intervened in the matter to no avail rather the situation became worse.

She was also alleged to have forcefully collected the sum of N650,000 from his husband before she spared his life.

It was gathered that Okechukwu, who hails from Anambra State, got married to Chinwendu from Abia State for some years but the couple had no child to show for the marriage despite the fact that Okechukwu was said to be a successful business man.

The wife was said to have been saddened by the situation which made her to turn violent against Okechukwu.

She was said to have continued to beat him despite warnings from the Police at Ago Division.

On Monday last week, Chinwendu was said to have grabbed Okechukwu, beat him mercilessly, but he managed to run to the Police Station and reported the assault.

She was reportedly assaulted the female police officer who was sent to invite her to the station as well.

The police eventually arrested her, and she was charged before the Ejigbo Magistrates Court for the alleged assault on her husband and the police officer.