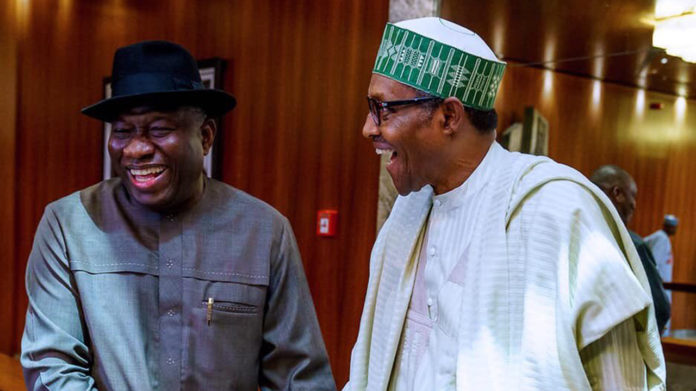 Special Adviser to President Muhammadu Buhari, Femi Adesina has said  Buhari and Jonathan are like brothers even though “Jonathanians and Buharists are spitting in one another’s eyes round the country, abusing one another’s father and mother at the same time.”

He said this is an article titled ‘GEJ meets PMB: A lesson for bitter-enders’,

He also affirmed that the meeting between between Buhari and Jonathan on Tuesday at the State House was “calm, friendly, characteried by absolutely no tension. No animosity.”

In the build-up to the 2015 general elections, the country was divided right down the middle. On one side were the Jonathanians, who supported the then incumbent President, Goodluck Jonathan, and wanted him to continue in office for another term of four years.

On the flip side were the Buharists (I was one, and remain one of them) who wanted the then former military head of state, Major General Muhammadu Buhari, elected civilian President. It was a pitched battle. O le ku, ija Ore (apologies to non-Yoruba speakers.

The war was robustly fought, and won by the Buharists. That was over five years ago. But you know what? Most of the gladiators are still in their entrenched positions. Most of the Jonathanians, not able to live with the reality of defeat, turned themselves to people who cavil, finding fault with the government of the day at the slightest drop of a hat. They became wailing wailers, and whenever they began to ululate, you would think raw pepper had been inserted into their tender and sensitive parts. Or that their lollipops had been taken away. They throw tantrums.

In history, such people are called Bitter-Enders, who fight to death. What is the etymology of the expression?

The Boers of southern Africa had gone to war against the British in 1899. The Boers were being beaten black and blue, battered on every side. At a point, they found it difficult to get food, ammunition and clothing. They would take uniforms from captured British soldiers, and wear them, minus the military insignia, yet they refused to give up.

The Boers were suffering terribly, but they shunned all peace initiatives. They were fighting all the way, to the bitter end. Till 1902, when the war eventually came to an end, after almost three years.

Anyone who today persists in a cause or action despite difficult or hopeless circumstances, is called a Bitter-Ender.

There was one such legendary soldier under French Emperor, Napoleon Buonaparte. His name was Nicolas Chauvin. He was so fanatical, that he became a byword for excessive fervor, bigotry and bias. Wounded 17 different times, till he became badly disfigured, he refused to surrender, even when Napoleon had been defeated. His cry was “The Old Guard dies, but does not surrender.” Well, he died. And the English language inherited the word ‘chauvinism ‘ from his name.

What of during our own unfortunate war in Nigeria? If my memory serves me right, I read My Command by Olusegun Obasanjo nearly 40 years ago. He wrote about some young Biafran soldiers, who continued fighting, even when Gen. Philip Effiong had surrendered to the Federal Forces. They were eventually cut down. Bitter-Enders.

The fissure among most Nigerians today is sustained by primordial loyalties, and by who they supported in the 2015 presidential election. But I have news for the Bitter-Enders.

On Tuesday, this week, former President, Dr Goodluck Jonathan, was at State House, along with President of Ecowas Commission, Jean-Claude Kassi Brou.

Dr Jonathan had been appointed Ecowas Special Envoy to Mali, to intercede in the crisis rocking the West African nation, after disputed parliamentary elections. Many lives have been lost, and the opposition members, under an umbrella called M5, are sticking to their guns that President Ibrahim Boubacar Keita, must leave office.

I was privileged to sit in at the meeting between our former President and the incumbent. And I took away some lessons, which should really be for everyone.

President Buhari and his guest came into the diplomatic room of the Presidential Villa together. Our President ushered Dr Jonathan to the visitor’s seat.

A while back, Jonathan was the host in that very same room, ushering visitors to their seat. Now, he is in that same seat. If President Buhari visits the seat of power after May, 2023, he too would be ushered by somebody else. Such is life. Are you holding tight to anything today? Vanity of vanity. We are all birds of passage. Nothing lasts forever. Not power. Not position. Not any office. Not even life. A vital lesson I’ve learnt from President Buhari is his constant realization that he would not be in State House forever. He would often tell in private conversations: “While we are here, we shall do our very best.”

Gen Yakubu Gowon was in Dodan Barracks for nine years. He left. Olusegun Obasanjo was there, left the first time, came back again, left willy-nilly after eight years. Generals Ibrahim Babangida, Abdulsalami Abubakar, Chief Ernest Shonekan, and all former living leaders use the visitor’s seat, if they come a-visiting today. The only thing permanent in life is change.

How was the atmosphere between President Buhari and Dr Jonathan? Calm, friendly, characterized by absolutely no tension. No animosity. While uncountable Jonathanians and Buharists were spitting in one another’s eyes round the country, abusing one another’s father and mother at the same time, here were the two men, the perfect picture of geniality. I say again, no tension, absolutely none. They were both perfect pictures of civility.

Dr Jonathan gave a rundown of the situation in Mali.

When he concluded, and made his recommendations, President Buhari was full of praises for him, saying he had elucidated clearly the Malian conundrum.

“Thank you for updating me so effectively. I have a very good brief of events now, “ President Buhari said. He promised to wade into the Malian situation, along with some other key Ecowas leaders.

With the briefing concluded, Dr Jonathan went into other issues. He thanked the President for giving him an official jet to make his travels convenient, and equally expressed appreciation for the Itakpe-Warri railway complex named after him last weekend.

Time to go, and the former President made a move for the visitor’s exit door. But President Buhari would have none of it. He led him through the exit exclusively meant for a sitting President. Very impressive.

Meanwhile, out there, the Bitter-Enders are knocking their heads against the wall, sitting on the complaint counter and wailing endlessly. But here are the two main men, treating each other like brothers.

May the wailers stop wailing. May the Bitter-Enders be purged of bitterness. Amen, somebody!