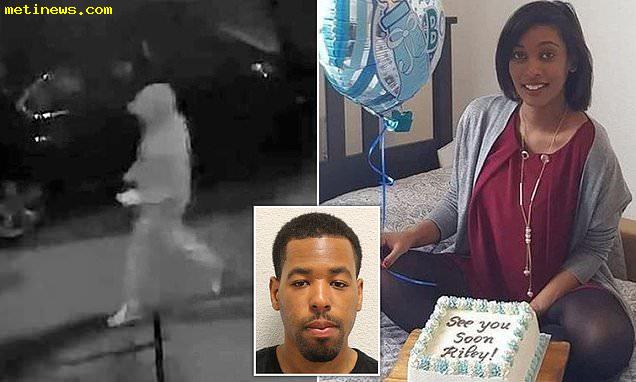 This is the chilling moment a jilted ex-boyfriend stalked the streets before creeping into the home of his pregnant ex lover and stabbing her to death – also killing their unborn child.

Aaron McKenzie, 26, crept into Kelly Mary Fauvrelle’s bedroom in Thornton Heath, south London in the early hours of June 29 last year and stabbed her 21 times after he had found an online receipt for a gift she had bought her new partner.

He is now facing life behind bars for the horrific murder.

The mother-to-be, 26, died at the scene and her son Riley was delivered via emergency C-section at the scene seven weeks before the due date.

The newborn, whose father was McKenzie, died after four days on a ventilator in hospital.

After the attack McKenzie took a driving lesson and pretended to the family he was devastated by Ms Fauvrelle’s death.

Ms Fauvrelle’s family, who had been sleeping in the house during the attack, wept at the Old Bailey as the jury foreman returned guilty verdicts following just two hours of deliberation.

Her mother, sister, and brothers endured hearing details of her terrible final moments and told the court how they tried everything to save her.

As McKenzie was taken from the dock, a man shouted: ‘How do you feel, you evil coward?’ from the public gallery.

Other members in court clapped briefly as another man shouted ‘it was your baby’.

Jurors were told McKenzie had used his intimate knowledge of the house to sneak in through her patio door which she kept ajar in the evening.

CCTV captured him stalking through the darkened streets before he vanished inside the house.

Re-emerging 11 minutes and 20 seconds later he bolted along the same street off into the distance.

At trial McKenzie invented a killer called ‘Mike’ in an effort to beat the charge after initially confessing to police.

McKenzie told the court he had even extracted a confession out of him.He was convicted of murder and will be sentenced on 17 July.

I Rob Because Many People In Government Steal – Suspect