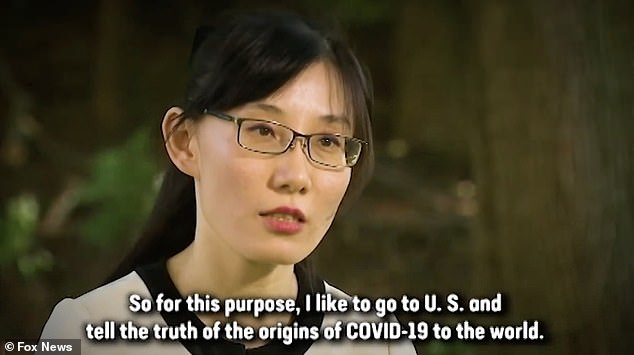 A respected Chinese virologist has claimed that the Chinese government covered up the coronavirus outbreak and says she has been forced to flee Honk Kong because she ‘knows how they treat whistleblowers’.

Dr. Li-Meng Yan, who specialised in virology and immunology at the Hong Kong School of Public Health, has claimed that Beijing knew about the novel coronavirus well before it claims.

Speaking during an interview with Fox News, she also said that her supervisors – many renowned as some of the top experts in their field – ignored research she began undertaking from the onset of the outbreak, which ultimately led to the global Covid-19 pandemic.

She believes her research into the coronavirus could have saved lives, and has risked her own by fleeing to the U.S. to share her story, knowing it is likely that she can never return to Hong Kong.

As a World Health Organization reference laboratory specialising in influenza viruses and pandemics, she also believes that she and her colleagues had an obligation to tell the world about her research – but no action was taken.

Yan says she was one of the first scientists to study the coronavirus that would become known as Covid-19, and claims at the end of December 2019 she was asked by her supervisor at the University – Dr. Leo Poon – to look into an odd cluster of SARS-like cases in mainland China.

‘The China government refused to let overseas experts, including ones in Hong Kong, do research in China,’ she said to Fox News. ‘So I turned to my friends to get more information.’

One friend she contacted was a scientist at the Center for Disease Control and Prevention in China who she said had first-hand knowledge of the cases coming out of Wuhan.

Her friend told Yan on December 31 about human-to-human transmissions, some time before China or the WHO admitted that this was possible with Covid-19, and on the same day a cluster of 27 pneumonia cases were reported in Wuhan where it is believed the virus originated.

When she told her supervisor what her friend had reported ‘he just nodded’, Yan recalls, and told her to keep working on her research.

On January 9, the WHO released a statement that said: ‘According to Chinese authorities, the virus in question can cause severe illness in some patients and does not transmit readily between people.

‘There is limited information to determine the overall risk of this reported cluster.’

Following this, she says that her contacts who had previously been talking openly went quiet – particularly in Wuhan – while others warned Yan not to ask about details

However, some of her sources did tell her that the number of human-to-human transmissions were rising exponentially, but when she reported further findings to her supervisor, she says she was told ‘to keep silent, and be careful.’

‘As he warned me before, “Don’t touch the red line,”‘ Yan said to Fox News, referring to the government. ‘We will get in trouble and we’ll be disappeared.’

Yan also claims that Professor Malik Peiris – the co-director of a WHO-affiliated lab – knew about the spreading disease but did not act.

While Yan says she was frustrated, she was not surprised. ‘I already know that would happen because I know the corruption among this kind of international organization like the WHO to China government, and to China Communist Party,’ she said.

‘So basically… I accept it but I don’t want this misleading information to spread to the world.’

Both China and the WHO have strongly denied the claims of a cover-up, while the WHO has denied ever working with Yan, her supervisor Poon or Professor Peiris, claiming in a statement that while Peiris is an expert who has been on missions and expert groups, he is not a staff member and does not represent the WHO.

Yan is now in hiding after travelling to the U.S., and fears that her life is in danger. She also claims that back at home the Chinese government is working to sabotage her reputation, intimidate her family and carry out cyber-attacks against her.