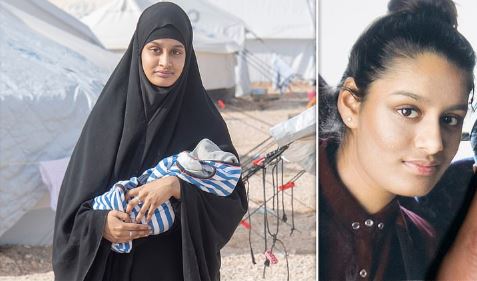 Isis bride Shamima Begum must be allowed to return to the UK to fight the Government’s decision to revoke her British citizenship for joining the murderous Islamic State regime, senior judges ruled today.

Begum – one of three east London schoolgirls who travelled to Syria to join ISIS – lost her UK passport after she was found, nine months pregnant, in a Syrian refugee camp in February last year.

The mother-of-three, 20, whose children with Dutch jihadi husband Yago Riedijk all died, is currently in the Al Hol camp in northern Syria but could be heading back to Britain within days.

Today the Court of Appeal found that she could not have an ‘effective’ appeal against the decision by the Special Immigration Appeals Commission (SIAC) in February while she is out of the country.  The three judges, led by Lord Justice Flaux, demanded she should be allowed back to the UK to continue her legal battle to regain her British citizenship.