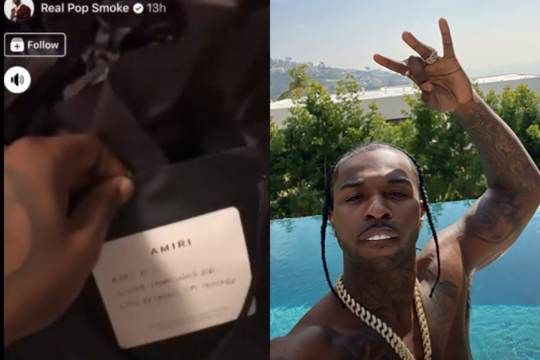 Police have said Rapper Pop Smoke’s social media posts led his killers to his LA home after he shared a photo of his address online by mistake.

The rapper, whose real name was Bashar Jackson, was fatally shot during a Los Angeles home-invasion robbery at the Hollywood Hills home he was staying. He was 20-years-old.

Back in February, the Los Angeles Times reported that the rapper had posted photos on social media showing large amounts of money, designer goods, and a luxury car. He also posted a story on Instagram and Facebook of designer bags, and the house’s full address could be read on the packaging.

Speaking on the arrest of five suspects in connection to the killing, Capt. Jonathan Tippet of Los Angeles Police Department’s elite Robbery-Homicide Division, said that three men and two teenage boys likely went to the home because they knew Pop Smoke was there from social media posts.

He said they stole items from the home, but didn’t reveal what was taken.

“We believe that it was a robbery. Initially, we didn’t really have the evidence but then we discovered some other evidence that showed this was likely a home invasion gone bad,” Tippet told The Associated Press.

“It’s our belief that (the home-invasion robbery) was based on some of the social media” posts, Tippet said. “It’s based on the fact that he was posting his information may have contributed to him knowing where to find him.”

The five suspects were arrested on Thursday morning are believed to be members of a South Los Angeles gang, who are also linked to the 2019 homicide of an 18-year-old man when a fight escalated into a shooting outside the Rose Bowl in Pasadena.

The adult suspects are being held on $1 million bail. Pop Smoke’s posthumous album was released on the 3rd of July, 2020.