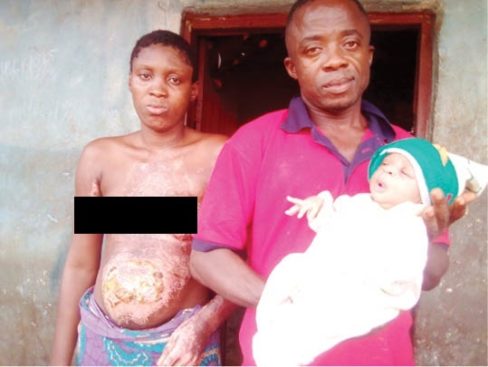 Two months after they suffered from a fire incident at their Oka, Umudike Mbano home, deaf and dumb couple are yet to get proper medical attention.

Thursday May 28, 2020 started as a normal day for the family of 32-year-old Uzochukwu and Mrs Ihuaku Igbokwe (25) in their one-room apartment barely enough to contain a 3 by 6 feet bed located in their family compound in the agrarian community of Oka, Umudike Ugiri in Isiala Mbano Local Government Area of Imo State.

While Uzochukwu went off early to the farm, his heavily-pregnant wife stayed back to attend to house chores. As the days wore on, it was briefly interrupted by a light shower, prompting Uzochukwu to come back home sooner than expected. With the approach of dawn, the couple relaxed outside, communicating as usual in their sign language, while their daughter Ugochi was lying inside the room. But tragedy struck at about 9pm. Ihuaku had gotten up to light the lantern whose oil had gone low.

However, hell was let loose as she struck the matches, there was bedlam as the room was engulfed by a raging flame. Uzochukwu, who was outside could not immediately fathom what was happening because of his limitation, but as he turned round, he saw his room engulfed in fire.

He rushed inside to rescue his wife and daughter who where at that time fighting for their lives however, before the duo could be rescued, they had suffered various degrees of burns. Ihuaku, with her pregnancy, suffered severe burns on her chest and abdomen while the worse affected was Ugochi, who suffered about 75 per cent burns all over the body. Uzochukwu’s uncle, Peter Nwanguma, who narrated the incident when Daily Trust Saturday visited the family penultimate Thursday, said the shout attracted other members of the family who came to their rescue.

According to him, the victims were initially taken to Joint Hospital Mbano, where they were referred to the Imo State University Teaching Hospital Orlu, but were curiously rejected by the authorities.

Nwanguma, who is a staff of Isiala Mbano Local Government Area, said, “Immediate the fire started, we rushed in to put it off and rescue them. “We removed their clothes and rushed them to Joint Hospital Mbano for the initial treatment because the burns were too much. “There, we were given a referral letter to IMSUTH Orlu, but to our amazement, they were rejected.

Nwanguma, who showed our correspondent the referral letter, said that they had no other option than to bring them back home where they have been receiving treatment locally since then.

The referral letter from the Mbano Joint Hospital to Burns and Plastic Unit of IMSUTH Orlu, stated that the victims suffered from kerosene explosion while trying to refill a lantern. The letter further stated that the hospital has tried to give them initial resuscitation and asked IMSUTH to take over.

He expressed surprise at the action of IMSUTH authorities. However, it was not all sorrow for the family as Ihuaku was on June 29 delivered of a bouncing baby boy.

Nwanguma described the birth of Baby Chima as miraculous as the grieving mother delivered the baby right in their home with the help of women around. He said the plight of the family was brought to limelight by a Facebook user, who visited them.

Since then, he said, a lot of people have been to the house to offer one assistance or the other. Indeed, it was a sorrowful sight as little Ugochi lay on a foam covered with a net to prevent flies from feasting on her wounds.

A woman guide, who accompanied our correspondent to the Igbokwe family, was moved to tears when a fly entered the net. Ugochi tried to draw the attention of her parents, but they could not hear her until their attention was drawn to her shrill cries. With no hope of any medical attention, the Igbokwes have taken their plight as fate.

Right now, Baby Chima cannot be breastfed as his mother’s two breasts are still covered with wounds. For now, the baby has to rely on baby milk for sustenance. All efforts to get the Commissioner for Health, Dr. Damaris Osunkwo, were unsuccessful.

Calls to her phone by our correspondent were unanswered. However, her counterpart in the Ministry of Information and Strategy, Declan Emelumba, said the state government is unaware of the plight of the family. He however promised to get all the necessary information and further act accordingly.

His hands were tied so badly that the rope entered his...