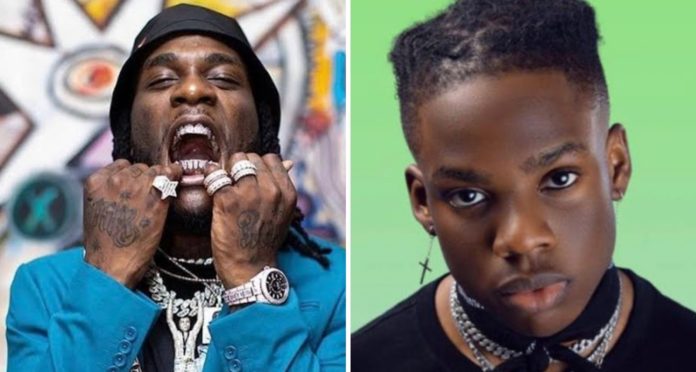 Mavin signee, Rema has thrown the whole of Twitter NG in a frenzy as he goes on a ranting spree attacking his jealous haters and also the Nigerian government. He also called on this new generation to rise up. Fans have since likened him to Kanye West who behaves regularly in such manner due to his bipolar disorder.

However, big celebrities are already giving Rema attention and one of them is the African giant, Burna boy. Burna boy who isn’t always active on Twitter has revealed he was so happy that he had to come back and he assured Rema of his support officially. Burna boy had also given Rema accolades for speaking up and called him “one of the last of a dying breed”. The “Odogwu” crooner also gave Rema a life lasting advice, “Don’t ever let them break you or change you”.

See screenshots of his series of tweets below: Another celebrity who reacted is Don Jazzy after a fan had told him to change Rema’s password. Don Jazzy told the said fan to read on as Rema is passing a message.

See screenshot of the reply below: Another celebrity is Davido who has reacted in his usual humorous and jovial character. Davido reacted funnily after Rema called on his management to stop trying to change his password.

DMW signee, Peruzzi also reacted in what could be seen as throwing shades. This is coming after Rema had said “When we in the room together, don’t label me proud or rude because I don’t smile, talk or laugh to your jokes.” Peruzzi then tweeted saying, “I always forget to smile. I’ve told my P.A to start reminding me when I’m out ?”. A thrown shade? ??

See screenshots of the tweets below: In case you didn’t get the gist, Rema said a lot of things as he pours out his mind on Twitter. See screenshots of his rants below: