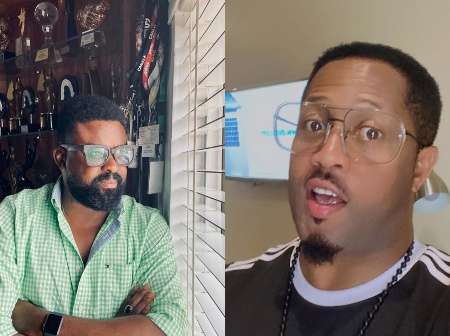 Filmmaker Kunle Afolayan has responded to actor Mike Ezuruonye‘s allegation of being anti-Igbo by sharing a DM screenshot in which he (Mike) was tagged a fraudster. 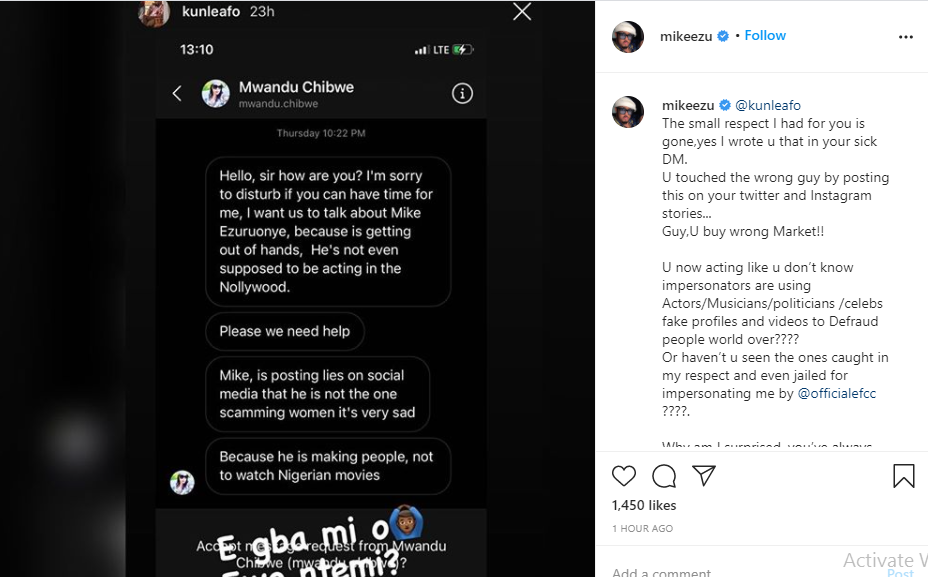 Mike accused Kunle Afolayan of hating Igbos and also recounted how the filmmaker said years ago that “Igbos are the ones spoiling the movie industry and he doesn’t like casting them.”

@kunleafo
The small respect I had for you is gone,yes I wrote u that in your sick DM.
U touched the wrong guy by posting this on your twitter and Instagram stories…
Guy,U buy wrong Market!!

U now acting like u don’t know impersonators are using Actors/Musicians/politicians /celebs fake profiles and videos to Defraud people world over????
Or haven’t u seen the ones caught in my respect and even jailed for impersonating me by @officialefcc ????.

Why am I surprised ,you’ve always HATED IGBOS..Are we going to forget in the Press ur statement years ago saying
“IGBOS are the ones spoiling the movie industry..U dont like casting them.”
Well this IGBO ain’t like u cos he was born in Lagos and speaks flawless Yoruba..And loves the Yoruba people
U Tribalistic human!!!!!

Guyyyyy I don come meet u for anything for this life???…OMO HOLD YOURSELF O,before we for inside Nollywood go talk your matter outside..Rubbishhh
Kunle U ARE TOO SMALL to bring me down with this stuuuuuupidddd unethical act…smh
If u were wise ,wouldn’t u as a colleague call me ,ask questions before posting this Rubbish on your Instagram and Twitter?…
WHO DOES THAT….Obviously u…Mtcheww

DUDE,,,if u want a problem ,boyyyyyyy BRING IT ON …I’m so freaking READY!!!.
I’ve never called OUT any of my colleagues on social media but NIGGA u messed up this time ..smh
Good Riddance to Bad Rubbish

Question
Where were u when GOD CHOSE ME???

Making a clarification on why he shared the post, Kunle Afolayan said he intended to “jocularly send a message to purveyors of fake news and unproven allegations that they should free him and by extension his other colleagues of such mindless allegations.”

I’m compelled to publicly offer a response to Mike Ezuruonye’s diatribe against my person.

On Thursday, I shared on my Instagram timeline a message posted on my comment section about an unfounded insinuation of his involvement in scams.

With a message in Yoruba, which I inscribed on the post: “E gba mi o. Ewo n temi?” (Spare me, what’s my own) I had shared the post on my timeline with the intention to jocularly send a message to purveyors of fake news and unproven allegations that they should free me and by extension my other colleagues of such mindless allegations.

It was not just a message to subtly disprove such accusations but to send a signal that I frown against such intrusive messages.

Sadly, my colleague and brother took it badly even after exchange of private messages to explain the harmless intention behind my post.

Not only has he called me out openly and making a social media feast of his disavowal, he has also accused me of being anti-Igbo.

While my apology to him subsists, because it’s only fair; it is pathetic of him to bring needless ethnic sentiment into a mere molehill of an issue that can’t be fancied as a mountain.

To me, it didn’t matter that the sender of that message is apparently Igbo. What’s important is that my post drew no negative comments until Mike decided to raise the roof.

To dissppoint Mike and other ethnic jingoists, this molehill issue isn’t enough for me to climb the rooftop to shout my detribalised Nigerian nature. The array of star colleagues and subject matters treated in my films, in addition to the staff in my workforce and friends in and out of Nollywood that i associate with, will easily put a lie to the cheap anti-Igbo toga that Mike has pitiable tried to dress me with.

My utmost regard is always reserved for him as a man of honour and large heart that I knew him to be.