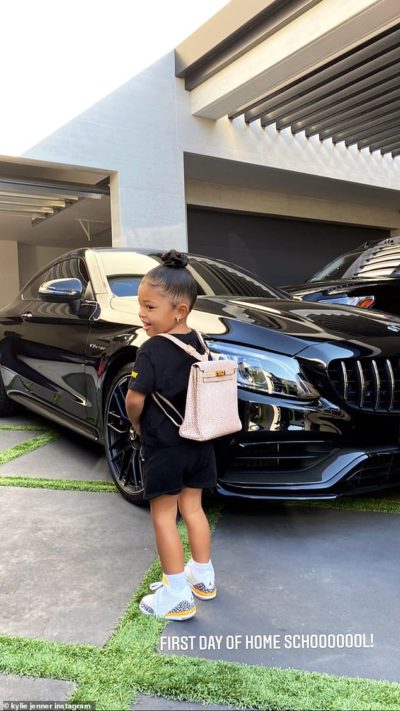 Reality star mother Kylie Jenner – who is said to be worth a staggering $900 million took things to the next level as she showed off her daughter wearing a Hermes backpack which is extremely expensive for Stormi’s first day of home schooling.

While many ‘back to school’ pictures see children in uniform and a satchel, Kylie’s little one was pictured sporting a light pink Hermes Taurillon Clemence Kelly Ado Backpack, which retails for an eye-watering $12K (N4,572,000.00).

Stormi, who is the daughter of Kylie and on/off ex Travis Scott, completed her look with Air Jordans and a black dress; the two-year-old also had delicate diamond earrings.

Kylie, 22, captioned the image: ‘First day of home schooool!’ with Stormi posing in front of one of the star’s many luxury vehicles in the driveway.

That’s a lot of money for a bag that a toddler will toss aside in no time.

How Actress Yvonne Jegede Got Sacked By Her Staff