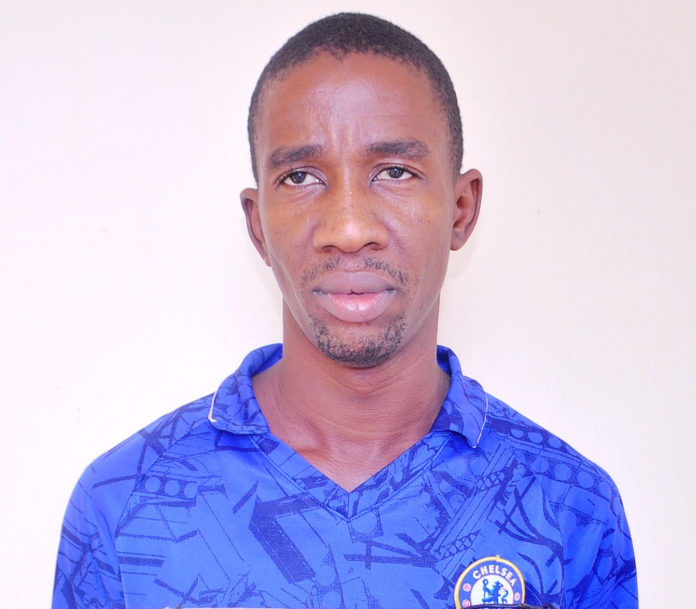 He did this on the pretext of executing a fake contract for Federal Ministry of Humanitarian Affairs, Disaster Management and Social Development (FMHDSD)’s School Feeding scheme under the Social Intervention Programme (SIP) of the Federal Government.

Abel was arraigned before Justice Aisha Kumaliya on Thursday, July 2, 2020 alongside Suleiman Adamu, Usman Adamu and Kingsley Madubuagu by the Maiduguri zonal office of the Economic and Financial Crimes Commission on 20-count charge that borders on forgery, possession of false documents, impersonation and obtaining by false pretence.

According to a statement released by the Economic and Financial Crimes Commission EFCC, count three of the charge reads

“That you, Allen Abel, Suleiman Adamu and Usman Adamu sometimes between February and March, 2020 at Maiduguri, Borno State, within the jurisdiction of this Honourable Court with intent to defraud, obtained 1313 (One Thousand Three Hundred and Thirteen) cartons of spaghetti and 480 (Four Hundred Eighty) bags of rice both worth N12, 110,000.00 (Twelve Million One Hundred Ten Thousand Naira) only from one Lelle Hyelwa Sini of Lelle Foresight Construction Co. Ltd. under the false pretence of executing a contract of supply of food items, purportedly awarded by the Federal Ministry of Humanitarian Affairs Disaster Management and Social Development (Federal Government School Feeding Programme, under the Social Intervention Programme, SIP), which you knew to be false and thereby committed an offence contrary to Section 1 (1) (a) of the Advance Fee Fraud and Other fraud Related Offences Act, 2006 and Punishable under Section 1(3) of the same Act.”

Abel pleaded guilty to the twenty count charges upon arraignment and Justice Kumaliya convicted him accordingly, and adjourned to September 30 for sentencing.

In another development, Justice Umaru Fadawu of the Borno State High court, Maiduguri has sentenced one Babagana Abatcha to two years imprisonment with an option of N500, 000.00 (Five Hundred Thousand Naira) fine.

The convict was arraigned by EFCC’s Maiduguri Zonal office on one-count charge of criminal breach of trust to the tune of N9, 000,000.00 (Nine Million Naira).

“That you, Babagana Abatcha sometime between 2017 and 2018 at Maiduguri, Borno State within the jurisdiction of this Honourable Court, being entrusted with care over certain properties to wit: N9,000,000.00 (Nine Million Naira) only, by one Umar Gujja Ali being payment for the execution of a purported contract awarded to you by a Non-Governmental Organisation (NGO) in Maiduguri, did dishonesty misappropriate the entire sum and thereby committed an offence contrary to Section 311of the Penal Code Laws of Borno State Cap.102 Vol.3 of 1994 and punishable under Section 312 of the same Law.”

Upon his arraignment, the convict pleaded not guilty to the one count charge, which prompted the prosecution to present witnesses and tendered several exhibits in proving its case .

Delivering his judgment on Wednesday, September 30, 2020 Justice Fadawu sentenced the defendant to two years imprisonment with an option of N500, 000.00 fine.

The court further ordered the convict to pay Seven Million Nine Hundred Thousand Naira in restitution to the nominal complainant or, in default, serve six years imprisonment and the years shall run consecutively.