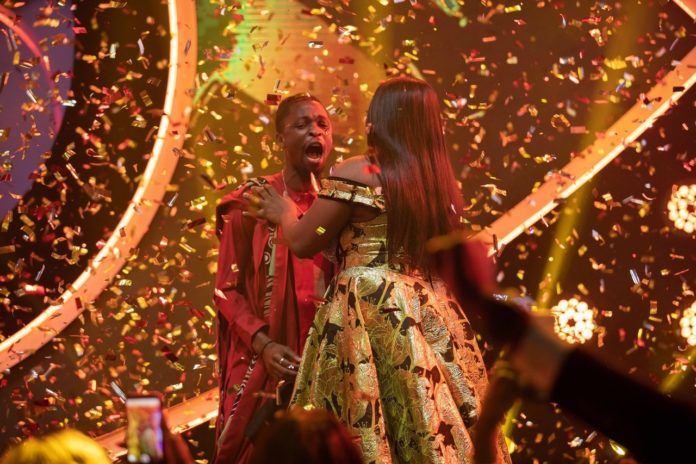 He had won in so many tasks and sponsored advertisement for many brands and companies during his stay in the house before he was crowned the winner of Big Brother Naija Season 5.

See the breakdown of Laycon’s wins in the house.

The Amatem Task was for different teams to do a short drama to promote Amatem Malaria Drug.

Kuda Task was a promotion task for the kuda Microfinance Bank.

Laycon wasn’t among the winners but he was in Team Free Bank Transfers which shared 1million Naira with Team No Fee Charges. The money was shared among him and other 8 housemates.

Hawaii Task was for the different teams to do a short presentation on Hawaii beauty products. Laycon was among the Team Carrot who won the task at the prize of 2Million which would be shared among him and four other housemates N400,000 each.

The Tom Tom Task was for the different teams to create a jingle advertisement for Tom Tom sweets.

Laycon was in Team Cool which came first with the winning prize of 1Million Naira. The money would be shared among the four participants in Team Cool.

The task was for the different teams to do words puzzle and make a house card.

Laycon was among the team 2 who won Airtel Task of 2 Million Naira although the money wouldn’t be given to them but would be donated to any organization of their choice.

After the Indomie Task, all housemates was rewarded 4 Million Naira. That’s N285,000 for Laycon.

The game of thrones team(Laycon’s Team) as we all know won the showmax task. He was rewarded with a smart flat screen TV and a one year free showmax subscription. He didn’t get cash anyways but he was among the winning team.

On completion of the Waw task, Laycon’s team (Team Colourful) made up of three housemates won and was awarded 1 Million Naira which would be shared amongst three of them and also a one year supply of home care products.

On completion of the Travel BetaTask Laycon’s team (Team Calabar) made up of four housemate won and was awarded 1 million naira which would be shared amongst four of them.

Laycon’s Team emerged winner at the prize of 2 Million Naira after the Guinness Smooth Challenge. The team consisted of 8 housemates making it N250,000 for each housemate.

Laycon’s Team emerged winner after the Johnny Walker Task. Luckily, they were given a million naira each and an all expense paid trip to Scotland.

Laycon’s Team (Team Payment Link) emerged winner after the task. Laycon and Ozo who was in the same team won 1Million Naira which would be shared between them at N500,000 each.

Laycon’s Team (Team Sports Development) won the betway MAD Task at the prize of N500,000 which would be shared between him and Ozo.

Laycon’s Team emerged winner after the Betway Trivia Task at the prize of 1Million which would be shared between him and Dorathy. They would also have a date with Don Jazzy, the popular Nigerian Producer.

Laycon who was among the five finalists of Big Brother Naija season 5 before he eventually won was rewarded 1 million Naira for doing Lipton Ice Tea presentations well. The other finalists also got 1million Naira each for making a nice presentation. They would also be a brand influencer for Lipton ice tea for one year.

Having seen Laycon’s wins and achievements while in the house, it’s obvious he didn’t win only 85 Million Naira but also a whooping amount of N5,496,440 and other expense paid trips.

In conclusion, the total amount of money Laycon won and went home with is approximately 90.5 Million Naira.

See Wheel Barrow With Side Mirrors