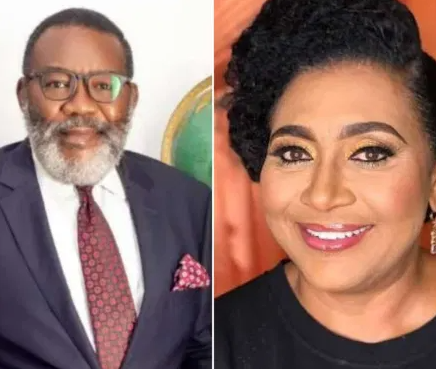 A 20-year-old school leaver, Peter Nwoke was recently arrested and imprisoned for leaking a video of the lawyer and Federal Commissioner of Imo State Office of Public Complaints Commission.

Hilda in a video posted on January 25, insisted that this can never happen as such technology does not exist. The entertainer who noted that she has been in the industry since 1992 and has moved from being an actress to being a director, wondered how much might have been given to the 20-year-old man as ”compensation” for him to” jeopardize his future.” and admit to have done such a thing.

In a new video she posted, Hilda is demanding a further investigation into the case as she suspects the accused might have been forced to own up to a crime.

Ololololo o nka kaqwanu biati o… this @willie.amadi tori ehn na wa
too many twists and turns in one case.
Seriously this story will make a fine farce and as my mother will say wherever there is one lie you will most definitely find more lies!
Wahala
Surely there are still good men in Imo state who can appeal this case. A 20year old should not be the fall man. @willie.amadi should be made to take his own fall himself
Evil prevails when good men fail to act
Surely the governor @he_hopeuzodimma and the acting CJ @ijeomaagugua can do something about this poor boy’s pathetic case

Kcee & E-Money Visits Corps Member Who Participated In His Dance...