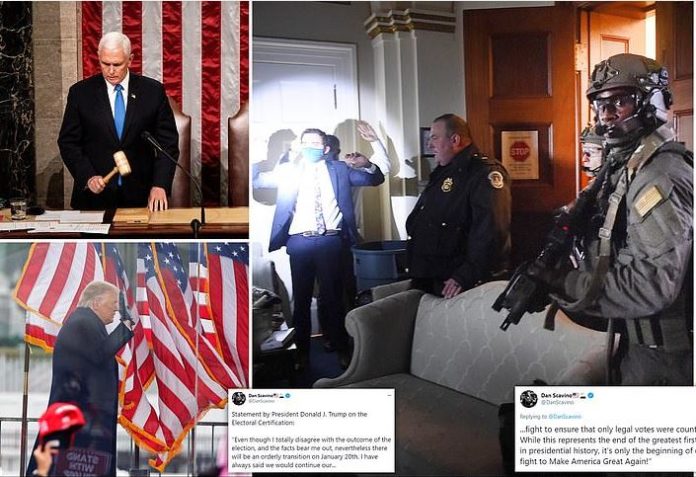 Donald Trump has promised an ‘orderly transition’ of power after Joe Biden’s election win was finally certified by Congress – a process delayed by hours after a day of chaos in the US Capitol that left four dead.

Trump, who has been temporarily banned from Twitter in the wake of the riot, issued a tone-deaf statement via his aide in which he conceded defeat, while at the same time hailing the mayhem as ‘the end of the greatest first term in presidential history’.

The President also continued to dispute the election result, saying: ‘Even though I totally disagree with the outcome of the election, and the facts bear me out, there will be an orderly transition on January 20th.

‘I have always said we would continue our fight to ensure that only legal votes were counted.

‘While this represents the end of the greatest first term in presidential history, it’s only the beginning of our fight to Make America Great Again!’

The statement came after one of the darkest days in American political history which began with Trump urging his supporters to march on the Capitol Building to stop the result being certified, and ended with four people dead.

Congress had been in session at the time of the attack, undertaking the typically-routine business of certifying the election result – which was being opposed by a number of Republicans loyal to Trump.

Amid the debates rioters broke in, trashing the symbolic home of western democracy as they looted and broke into congressional offices as politicians donned gas masks and fled under armed guard.

One woman – 14-year Air Force veteran Ashli Babbit – was shot dead inside the building, while three others died from ‘individual medical emergencies’ elsewhere on Capitol property.

Pipe bombs were also left outside the headquarters of the Democrat and Republican National Committees and a truck-full of rifles and Molotov cocktails seized.

Biden described the rioters as ‘extremists’ staging an ‘insurrection’ that ‘bordered on sedition’ and called on Trump to order them away from the building. Trump did eventually speak out – to call the rioters ‘great patriots’ and say he ‘loved’ them, a move which saw him temporarily banned from social media.

‘Are You No Longer In APC?’ Followers Ask Dino Melaye Over...