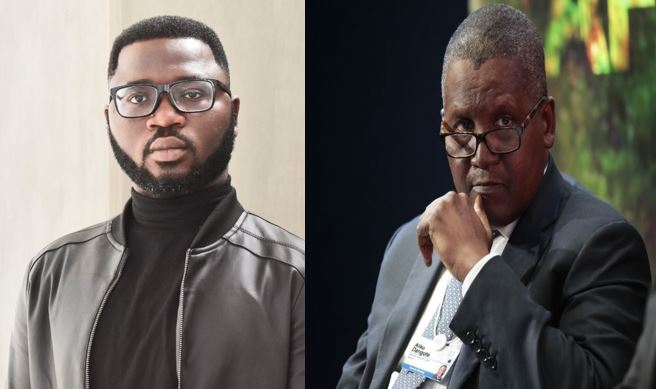 Ayo Sogunro, a Nigerian lawyer and writer has said that the wealth of Aliko Dangote, who’s the richest man in Africa is nothing to admire.

According to him, they are baking the bigger cake but they haven’t discovered how to slice a small part of the cake. This is coming just few hours after, his alleged ex-girlfriend took to Instagram to reveal her relationship with the billionaire.

“Reminder that Dangote and co are rich only because they have proximity to power. They are not baking a bigger cake, they have merely figured out how to take a big slice of the small cake. There’s nothing admirable about this kind of wealth.”

This tweet has sparked thousands of reaction from Nigerians, most of them have agreed with the tweet, most of them have also taken the liberty to ‘calculate’ how Dangote is ‘cheating’ Nigerians. Meanwhile, some people have cautioned Sogunro against tainting the image of the businessman.

“Buhari kind of thinking, close the border so that we can be richer, if you blame billionaires for the poverty in the land, do you know how many millionaires are parasitic to Nigeria ? You want to blame a business man for doing his business successfully, this just jealousy”

“All Wealth is born by TIME/CHANCE, proximity to power/people in NEED. MTN was the latter&declared profit in their 1st year of operations. You may “Succeed” because of Proximity, but you are only a “Success” when you maximise Opportunity. Dangote in d last 25yrs proves d latter.”

“I have not done my research extensively enough but I agree with your point. What I am not sure of is if any billionaire anywhere in the world became one without government patronage. There are indications that even the likes of Bill Gates, Bezos etc. enjoyed some govt patronage.”

“8 hours, 27 minutes into a new year, this baseless demonism is what you wake up to do. It’s certain your soul is sold to evil, your mind is polluted and taken over by dirt. You’re only still walking, you really do not have a life.”

“Dangote is rich from stealing from our collection wealth. Someone did a thread how Dangote will import goods on zero duty and most times his application for waiver will be in process and not approved but his goods will arrive and cleared on a waiver not approved”

Do you agree wit the writer?