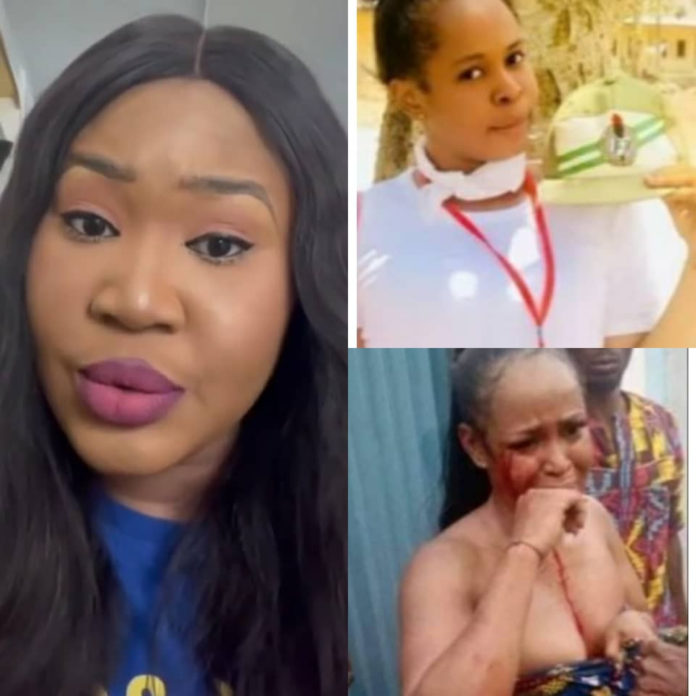 A young lady, Effiong Laurel Scott, has come out to claim she was raped by the man who was hacked to death by a youth corp member in Akwa Ibom.

Recall that on Sunday, January 10, a youth corper named Princess Odume, was apprehended and handed over to the police for allegedly killing a man identified as Japhet Akwaowo.

Princess alleged that she killed him in self-defense after he threatened to kill her upon her refusal to oblige his request to remove her clothes so that he could have sex with her. read here

In a video that has now gone viral, Effiong alleged that Japheth also raped her in 2017 when she was 18.

”My name Effiong Laurel Scott and I am from Akwa Ibom state. I heard about the incident that took place here in Uyo of the girl that butchered the guy to bits and pieces. I heard about it a few days ago but I did not think much of it until yesterday.

I was just scrolling through Facebook and I saw a comment on the post that stated ‘Even if it was a rape case, why would she kill the guy?’.

That caught my attention and I went through the post and I started reading through and this was the girl’s side of the story that said the guy tried to rape her.

I was like let me see the girl’s photo and the guy’s photo.

As God would have it, it turns out that this was the guy that raped me in 2017, July 17th to be precise in Etinan local government.”

Giving details of how it happened, Effiong said

My dad was transferred top Etinan and we moved to Etinan to be with him. I celebrated my 18th birthday on May 11 and this incident happened in July. I was on my way out on a bike. This guy trailed me on the bike and came to me. He stopped the bike that I was on. He got the number. This guy is actually a rapist and a killer.

He is not just a rapist, He is a serial rapist.

So this guy met me. He sounded so sound. The guy was like since you are in a haste, just give me your number. When you come back we would get to see and talk. Me too I was in a haste so I was like let me just give him my number, it’s not like I was going to pick his call.

On my way back home, when I was on the exact spot that he met me to get my number, my phone rang and I picked up and he was like where are you?. I told him I was where he saw me. By this time, this was around 6.30 in the evening. In Etinan, by 6pm, everybody is already on their way home or in their houses.  It is already late and almost dark.

He told me to stop by a filling station. I stopped by and stood beside it. Listen to the storyline so that you would know that the whole ””jazz” thing that the girl said is true and it is realistic. It is very very true that the guy uses ”jazz” on his victims. He hypnotises them.

The road he entered and started taking me through was a bush track. He took me through that road and in my mind, I was like what are we doing here exactly. By the time we got into the house, the house was like a deserted place.

So I got into the house and the moment I saw it, I said I can’t stay here. So I got up and told him I was going, maybe I would come another time. I reached for the door. Lo and Behold, the door was locked.

As I turned my back to ask him to open the door, this guy got a matchete and a pen knife. He told me in that girl’s exact words that he will rape me and kill me and nobody will know about it and nobody will do anything about it. Yes! Those were his exact words to me too. No single thing changed.

I begged as an 18 year old. I begged. I cried. What didn’t I do that day. I begged him. I was literally crying.

Effiong said she left Etinan a few weeks after the incident

”The only person I was able to tell this thing to then was my elder sister. Somehow he got to know that my elder sister knew about it. He started threatening her from that time. This guy’s name is Akwaowo Japheth. That is his name. Quote me. I am the one saying it. This guy’s name is Akwaowo Japheth. I can vouch on my life that that girl did not just want to murder him.”he said