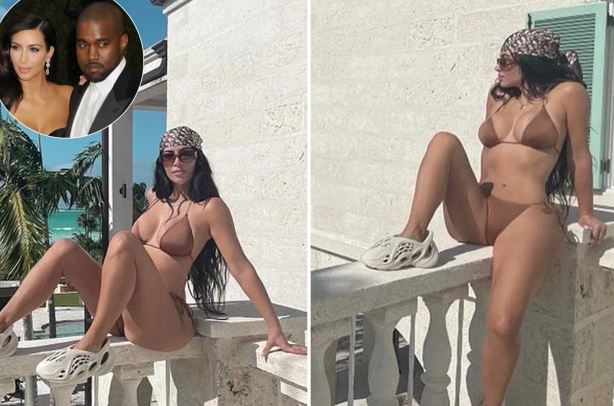 Kim Kardashian fans are speculating she’s back together with her husband, Kanye West, as she wore sneakers from his Yeezy brand despite her plans to divorce him.

Kim, 40, posted two sizzling photos in a brown bikini while in Turks and Caicos.

In one photo, Kim showed off her curves while wearing a barely-there brown bikini.

In the other sexy snap, the Keeping Up With the Kardashians star stared at the peaceful view including palm trees and the ocean.

She captioned the photos: “Just Chillin.’”

But though her famous curves were on full display, fans noticed the mom of four was wearing $1,440 Foam RNNR “Ararat” sneakers from her husband’s Adidas Yeezy line.

Followers flooded the comments with speculation the two have reconciled.

One fan commented: “Am I the only one wondering if they’re back together bc of the yeezy’s??”

A second wrote: “Still got the yeezys on. ? Are you guys back together?”

A third said: “Wait she still got the yeezys tho.”

A fourth wrote: “Happy to see you still wearing Yeezy @kimkardashian then there’s hope. I’m not giving up on you both by the way you gorgeous as always.”

Authorities To Investigate Pastor After Claiming To Have Resurrected Dead Man.