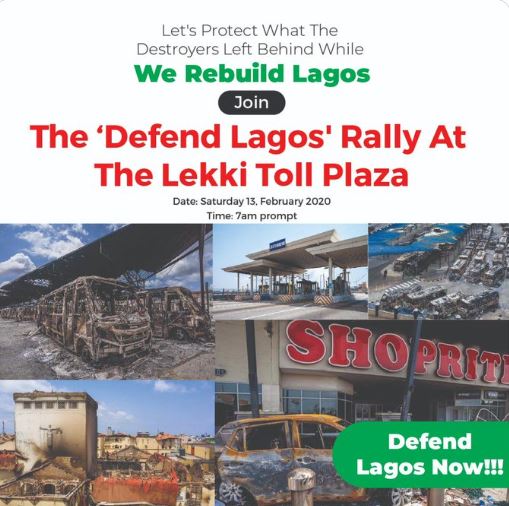 #DefendLagos is currently trending on Twitter as some Nigerians are planning a counter-protest at the Lekki tollgate this Saturday, February 13.

This came few hours after some Nigerians who are against the reopening of the Lekki tollgate announcer they will be protesting on February 13.

The announcement brought about the use of the hashtag, #OccupyLekkiTollgate on Twitter, as many Nigerians supports the protest.

One of the promoters of the #DefendLagos protest, Olusoga Owoeye @olusogaowoeye wrote “Show your love for our Lagos. Get your friends and your neighbors to be there. Join the DefendLagos Rally at the Lekki toll plaza on the 13th of February. We will not cede our city to criminals and insurrectionists. Lagos is our pride.”

Another promoter, @salamhunters, wrote “We will defend and protect our Lagos from looters and arsonists.”

Na the same “Leaders of tomorrow” dem don give raba to trend #DefendLagos. Awon eyan Voltron, defenders of the Lagos.?

What we have learned from the Judicial panels , #EndSARS , and #LekkiMassacre ;
1. Never negotiate with this govt.
2. When you go out on the streets, stay on the streets until your demands are met.
3. Prepare for violence, they always bring it.

Seeing #OccupyLekkiTollGate trend has made me smile. One of the sincerest smiles I’ve worn in days.

This is their idea of defending Lagos, but #OccupyLekkiTollGate we must until justice is served; until #BuhariMustGo #Buratai and @jidesanwoolu are brought before @IntlCrimCourt #EndSARS #nogoingback #RevolutionNow pic.twitter.com/MfYPHFt863

Suicidal Man Rescued While Trying To Electrocute Himself In Ibadan