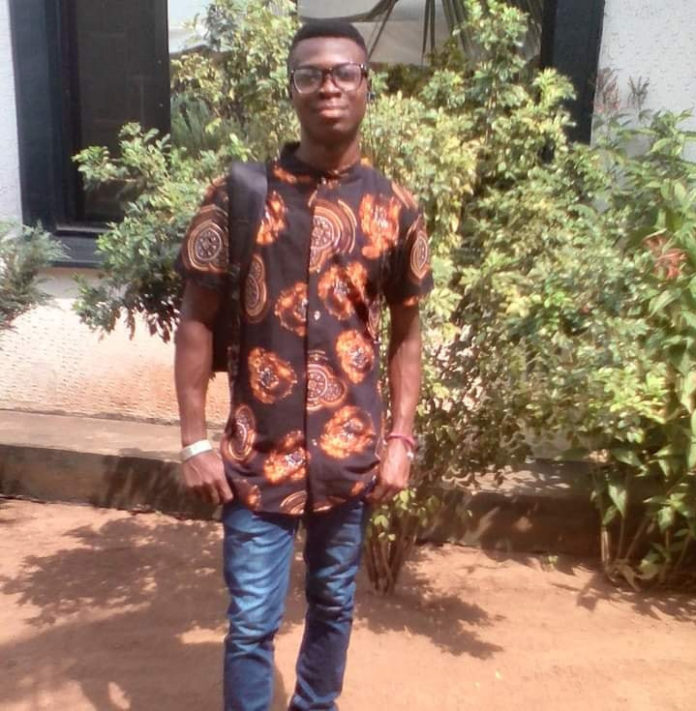 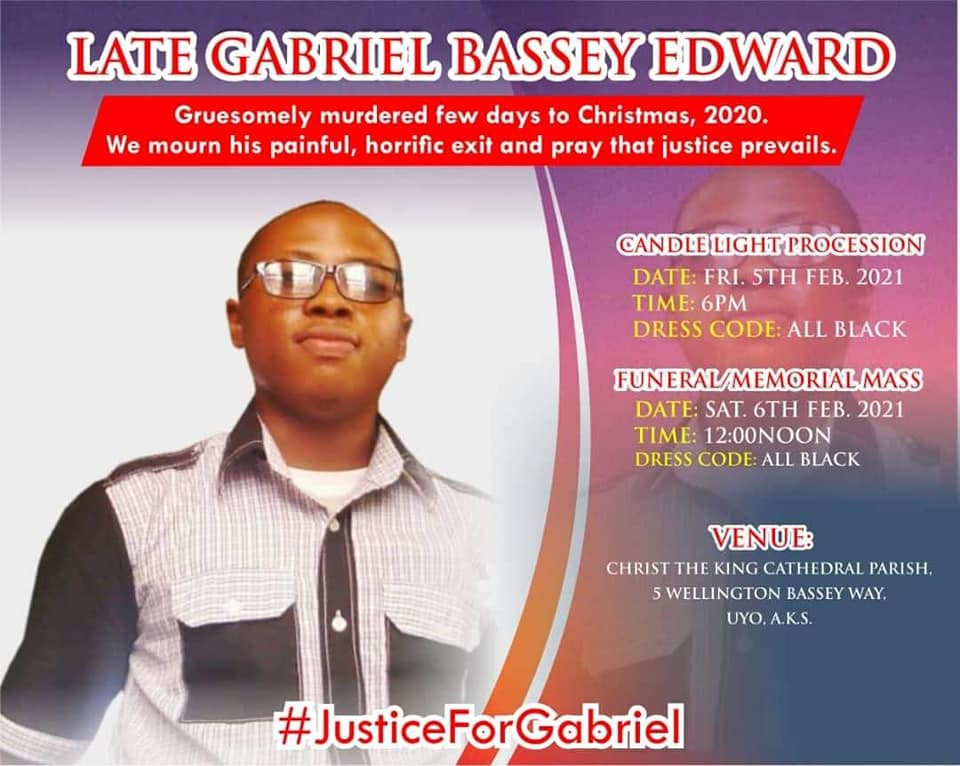 Late Gabriel, the Secretary of CYON, CKC and the Liturgy Committee, CYON, Uyo Deanery, was butchered to death and left to rot in his apartment at Atakpa Ifa Ikot Ubo, Ifa Ikot Okpon in Uyo, few days to Christmas 2020. His decomposed body was discovered and buried on Saturday, 26th December. 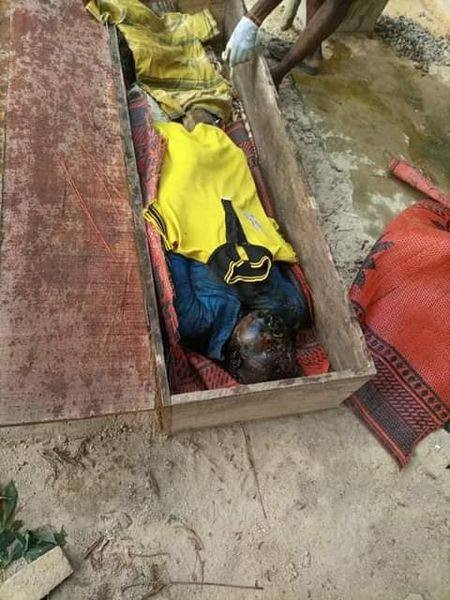 Rev. Fr. Asanausung gave the charge during his homily at the funeral/memorial Mass held in honour of the slain student on Saturday, February 6, at the parish.

Father Asanausung, who extolled the late Gabriel Bassey’s sterling qualities during his life time, described him as an “honest, dedicated, resourceful young man, and a devout Catholic.”

“Gabriel was a young man with prospects and had a bright future. He was an honest person, who loved God, loved the church and loved to pray,” he said.

“If Gabriel died of natural causes like accident, illness etc, the world would have understood, but not being butchered. God in his magnanimity will never allow Gabriel’s dead to be in vain,” the cleric submitted. 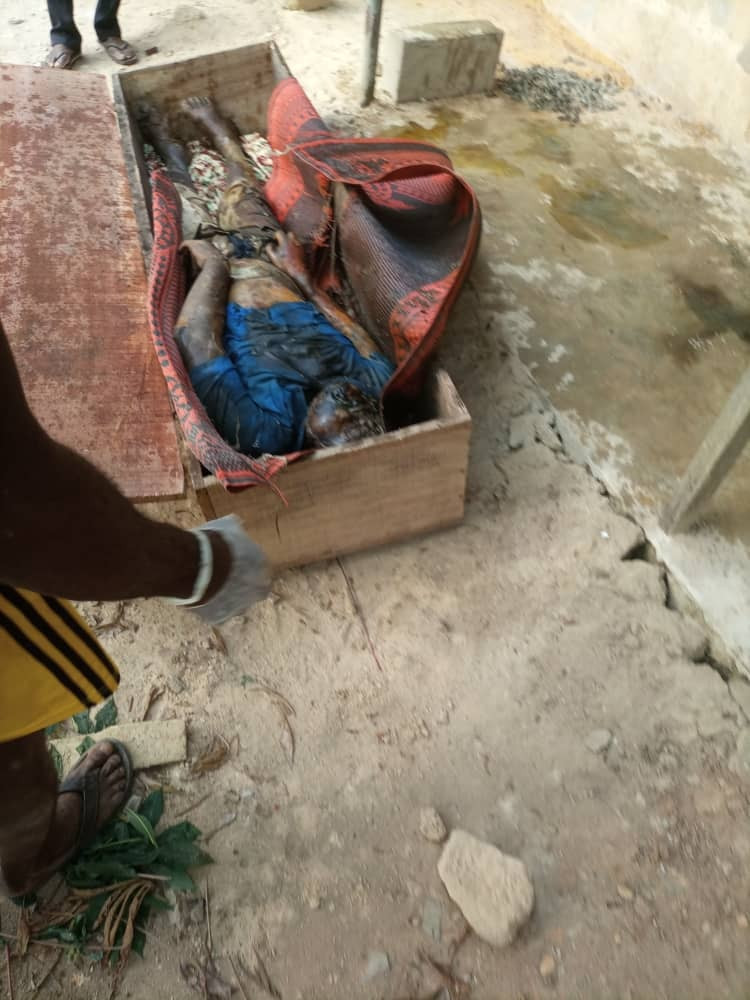 Speaking further, he said: “He was a “quiet young man who was always minding his business. A simple, focused fellow, who had a deep-seated desire to explore life and know more. He was one who stood for the truth and would never compromise. He was close to the church, a friend of priests and spent much of his time in the church. He was a Catholic par-excellence, the clergyman emphasized.

He urged security agencies to do all it takes to bring those behind the death of Gabriel to justice, even as he charged parents to strive to always settle marital disputes for the sake of their children.

“Again, I want to call on parents to note that, single parenting is never the best; parents should endeavour to reach a compromise to make their marriage work and last for the sake of their children.”

The father of the deceased, Mr Emana Bassey, who spoke at the service called for justice to prevail in the matter according to the laws of the land. 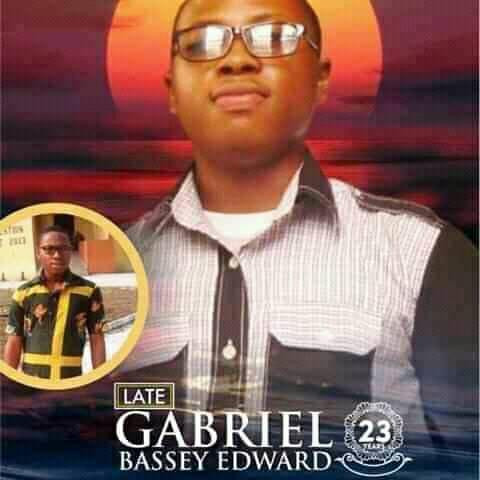 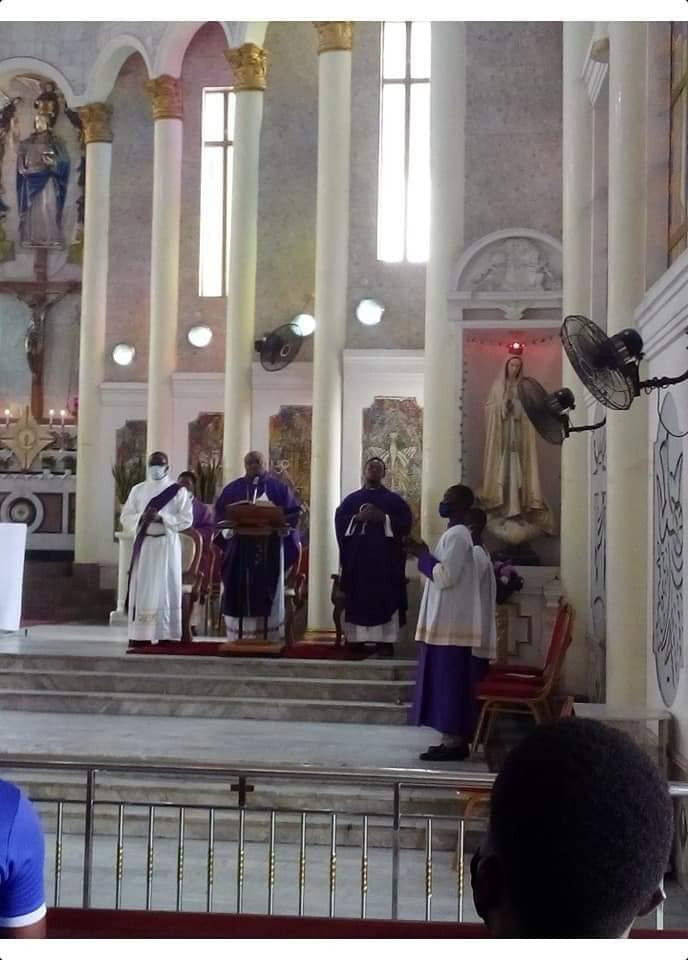 Prior to the burial, a candlelight procession was held on Friday in honour of the deceased with youths from different walks of life and other well-wishers turning out in large numbers to mourn the late CYON secretary.

Condolence messages were received from  various groups and organizations, the Akwa Ibom State House of Assembly, among others. 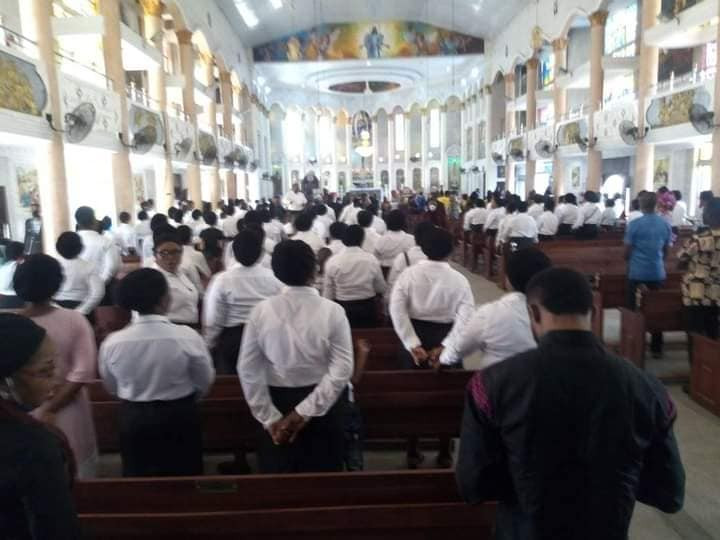 Meanwhile, a a pastor of Living Faith Church in Ifa Ikot Okpon, Uyo, has been reportedly arrested in connection with the murder.

The prime suspect identified as pastor Prince Emmanuel Umoh is said to have developed a cold shoulder with Gabriel on issues pertaining to a property belonging to the deceased’s late mother. He was reportedly the last person seen with the student.

JUSTICE FOR GABRIEL: MURDER IN THE CATHEDRAL!

He never painted the said pulpit.

The same pastor Prince Emmanuel changed the sitting arrangements in the Church and moved the chairs away from the usual area which is close to the part of the building where Gabriel Iived (the corpse of the deceased was dumped in his room after he was murdered) on the same day.

Was this done to reduce the odour from the corpse?

Neighbours saw him with a bucket on the said date. There was blood stains on the bucket and on his cloths. When they asked him, he claimed that he sustained injury after he fell down but he could not show the said injury.

At the Shelter Afrque police station, all that he showed was an old minor scratch on his hand which cannot explain the degree of blood stains and traces of blood found on the floor, bucket, chairs and his cloths.

There are still traces of blood on the floor of the Church (please note that the Church is a hall owned by Gabriel’s mother who passed on in 2019). The hall was partitioned, and the larger part rented to Winners Chapel while Gabriel lived in a small part.

Gabriel repeatedly complained about missing items in his house. Only the pastor and Gabriel had keys to the premises and the house of the deceased where he used to keep some items belonging to the Church. Items stopped missing the moment Gabriel changed/replaced the keys.

The Church had paid N150,000 for renovations which was handed over to Gabriel to supervise the work. The pastor openly said he was aggrieved by the refusal of the Church to allow him to keep, disburse and manage the money as the resident pastor.

Above are just some of the facts of the case. Right now, there are nefarious efforts to shield the suspect. The mother of the said suspect is an Inspector in the Nigeria Police Force.

Living Faith Church is standing by their “pastor”.

We demand justice for Gabriel. 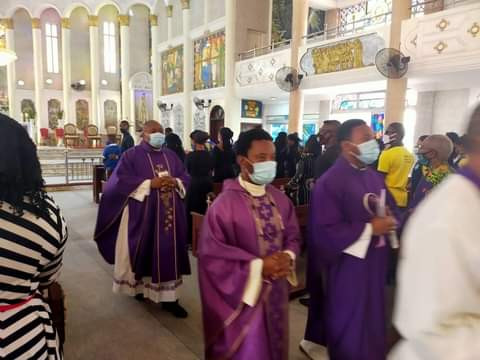 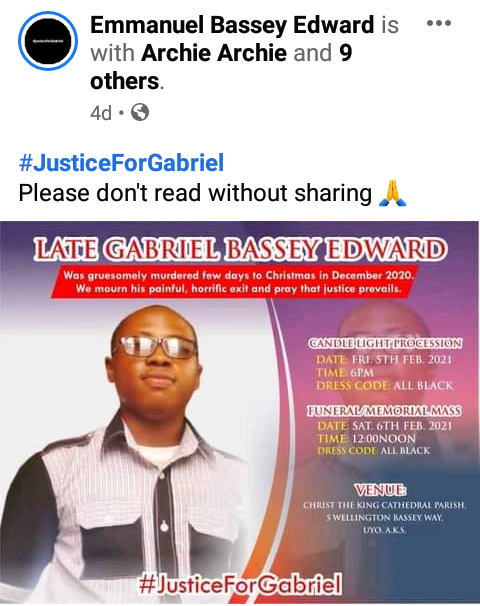 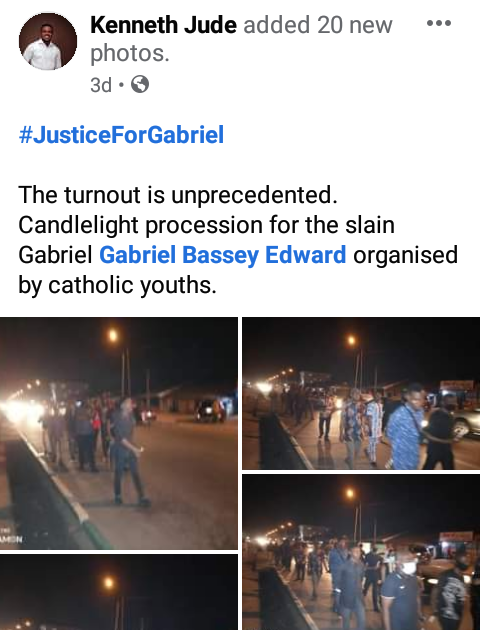 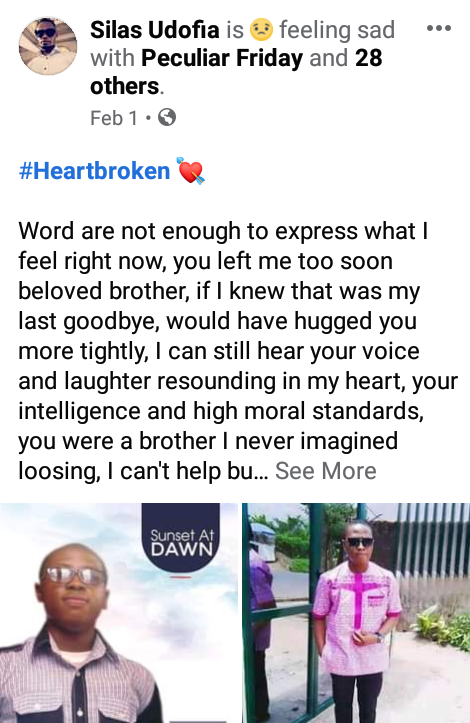 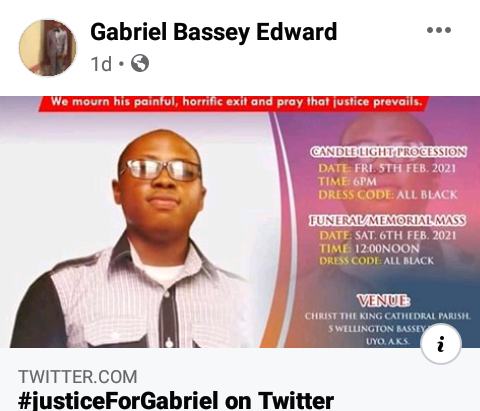 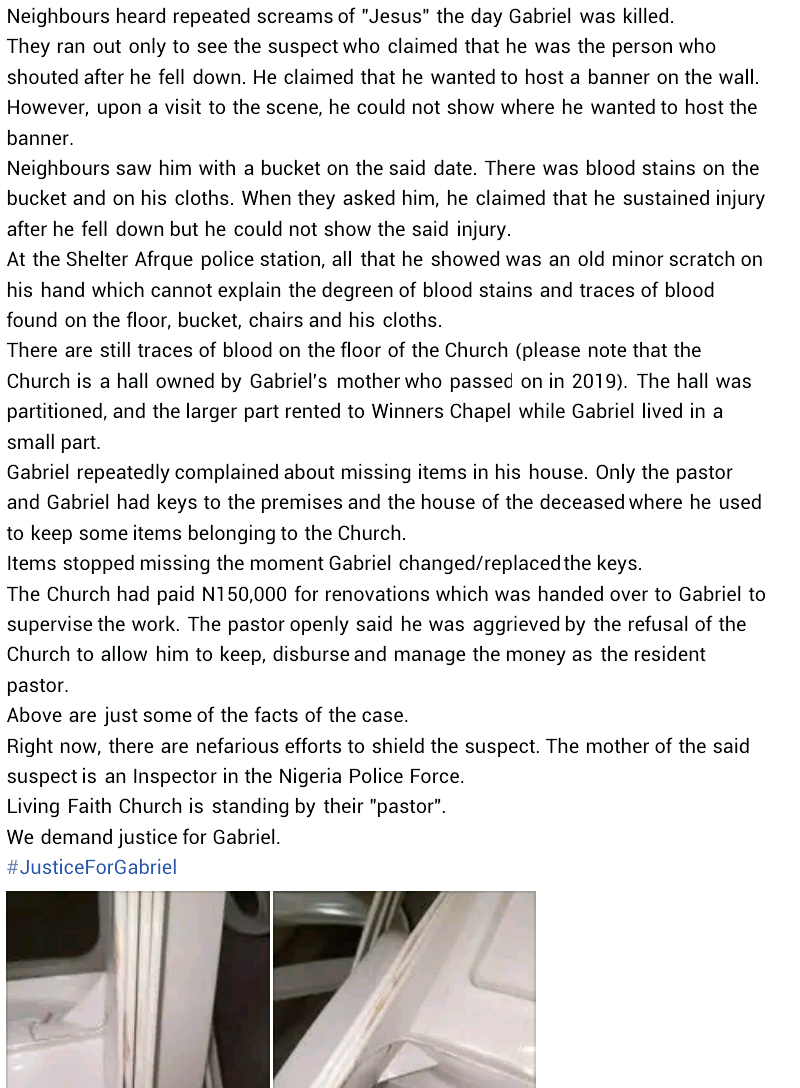 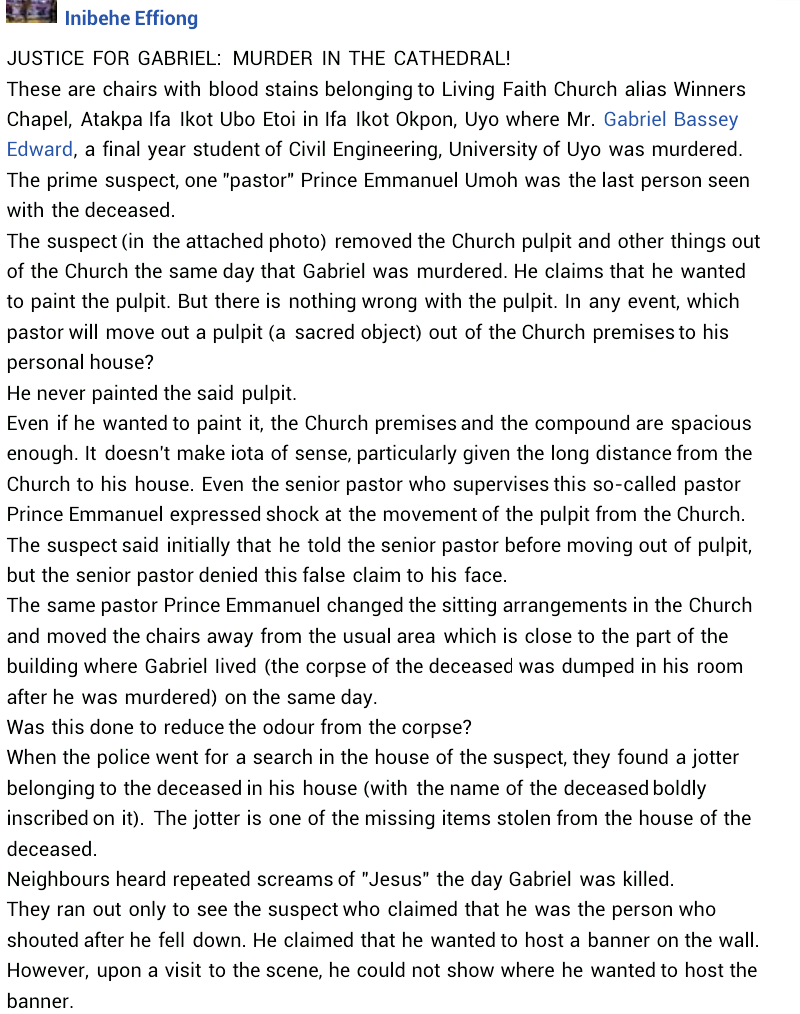