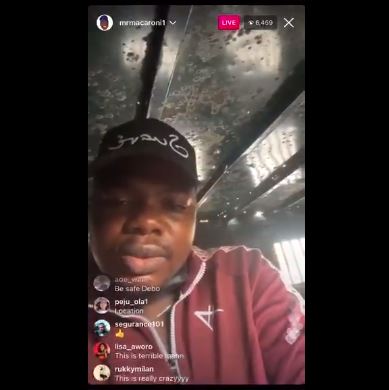 The comedian joined other protesters at the tollgate to express his dissatisfaction with the decision of the Lagos State Judicial Panel of Inquiry allowing the Lekki Concession Company to reopen the Lekki tollgate on Saturday.

Adebayo was arrested after the police told him “we don’t want you here”.

In a Live Instagram  before his phone and those of other arrested protesters were seized, the comedian lamented that “Lekki is  under military rule.”

They’ve collected Mr Macaroni phone after arresting him wrongfully!! Who did we offend in this country!
He is at lekki toll gate in a black van/truck ? they snatched his phone #EndSARS #Lekkitollgate pic.twitter.com/nsGzRjIhns

He said, “How did you think the reopening of tollgate is the next line of action? If you didn’t do that today, we won’t have a right to be here.

“It is a disrespect to say that you want to reopen at this tollgate. Are you spitting on the graves of the dead?

Another protester, Joseph Seye, said, “I am an artist. I am not a criminal. I came here to protest. It is my right. It is not a crime to protest. Why are the government treating youths this way?”

And their phones have been collected

Be Careful Of These Drugs That Killed These Musicians (Photos)