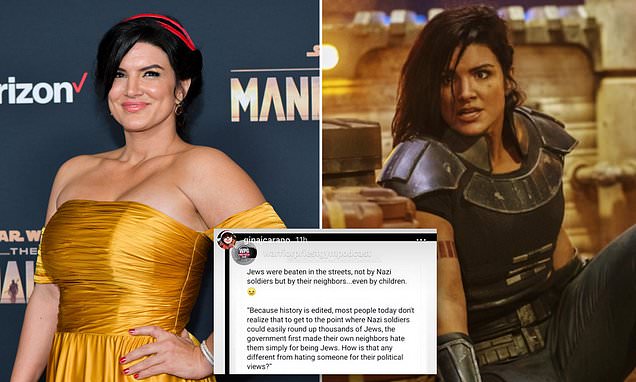 Actress and former MMA fighter Gina Carano has been fired from the cast of the Disney+ Star Wars series The Mandalorian, following online outrage over a social media post that likened the murder of Jews during the Holocaust to the current U.S. political climate.

A spokesperson for Lucasfilm said in a statement on Wednesday that Carano is not currently employed by the production company with ‘no plans for her to be in the future.’

‘Nevertheless, her social media posts denigrating people based on their cultural and religious identities are abhorrent and unacceptable,’ the statement read.

Talent agency UTA has also dropped Carano as a client following the controversy, according to Variety.

Carano fell under heavy criticism after she posted on Instagram Stories that ‘Jews were beaten in the streets, not by Nazi soldiers but by their neighbors…. even by children.’

The post continued: ‘Because history is edited, most people today don´t realize that to get to the point where Nazi soldiers could easily round up thousands of Jews, the government first made their own neighbors hate them simply for being Jews. How is that any different from hating someone for their political views?’

Carano, who played the recurring character Cara Dune on the ‘Star Wars’ series, deleted the post but it was widely shared online and spurred the #FireGinaCarano hashtag to trend.