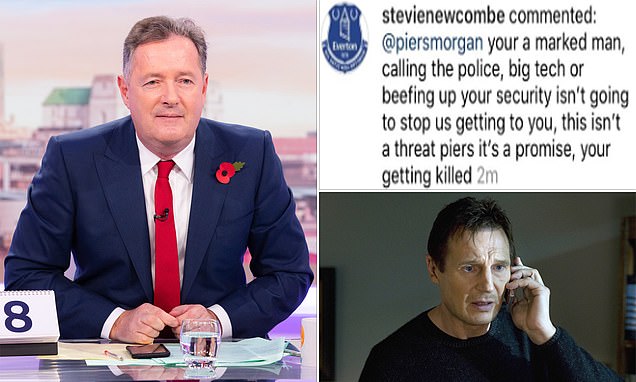 ‘I used to be constantly disappointed by the human race,’ tweeted Ricky Gervais today, ‘but Twitter has helped me lower my expectations.’

As so often, the scalpel-sharp comedian’s scathing summation perfectly encapsulated my own thoughts about a social-media platform that’s descended from fun public chatroom into seething cesspit of self-righteous fury and bellicose bile.

I still love Twitter, both as an unparalleled journalistic resource and as an entertaining way to interact with people, but even my rhino-thick skin gets occasionally pierced by the shudderingly vile abuse that contaminates so much of it these days.

You can benefit hugely in terms of raising your profile (I currently have 7.7 million followers on Twitter and 1.4 million on Instagram) and promoting your work. But in return, you’re going to be bombarded with a lot of vicious hate.

And it doesn’t matter who you are; in the past few weeks, I’ve been sickened by horrendous Twitter abuse aimed at national heroes like Captain Tom, Marcus Rashford and even Prince Philip while he received treatment in hospital.

For someone like me who deliberately provokes lively debate, there’s an expectation of passionate critical reaction and I largely enjoy it.

In a live-streamed Twitter Q&A with the public this week, Gervais was asked who he thinks handles fame well.

‘There are people that seem to love it,’ he replied, ‘the atmosphere, the game, good and bad – like Piers Morgan. He’s good at it because I think he evolved being a contrarian.

‘And you’ve got to know that there are some things he doesn’t mean, like being furious about vegan sausage rolls, and some things he means, like gun crime. He knows he’s got to live or die by the sword; if he slags people off, they’re going to slag him off. But I think he handles it well, though maybe he goes home and punches the wall screaming “they f***ing said WHAT?” ’

All this is true, although I genuinely loathe vegan sausage rolls.

But while I never go home and punch the wall, even I have a line in the cyber-abuse sand.

This week, someone posted this comment on my eldest son’s Instagram after he put up a photo of him and me: ‘Piers Morgan, you’re a marked man, calling the police, big tech or beefing up your security isn’t going to stop us getting to you, this is not a threat Piers it’s a promise, you’re getting killed.’

Whoever it was then made a second threat to my son and his mother, warning him to ‘watch your back’ and saying they too would be ‘getting it’ if I didn’t.

I’ve responded by calling in the police, and big tech (Facebook, who own Instagram, are co-operating with the cops), and beefing up my security. I intend taking this all the way to court and accountability.

In the words of Liam Neeson in Taken: ‘I will find you.’