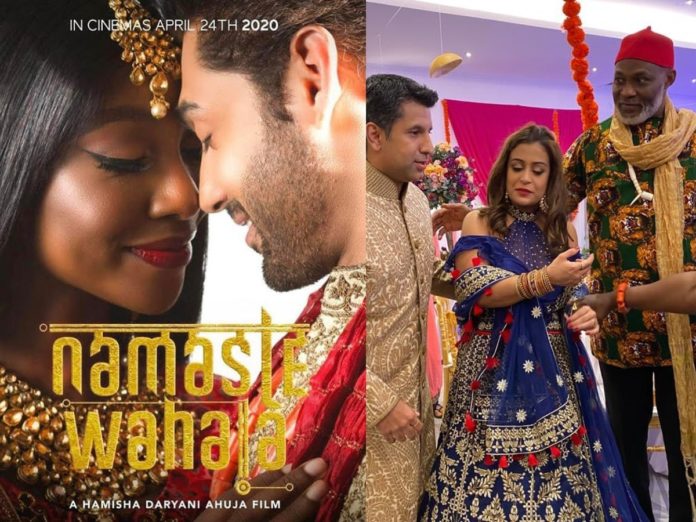 Ini Dima-Okojie and Bollywood actor, Ruslaan Mumtaz play lovebirds in the new Netflix Naija original.Netflix Naija’s latest acquisition is a case in point for what you ordered versus what was delivered as you may have already noticed.

One thing this film’s makers got right was marketing it as a Bollywood and Nollywood union and strategically serving the half-baked flick to unassuming Valentines’ day enthusiasts. It is a thumbs down from thereon.

For starters, first-time film director/ rookie actress Hamisha Daryani Ahuja attempts albeit haphazardly, to make a movie that appeals to deep-dyed Bollywood romance fans with a multicultural spin to it.

Starring television sweetheart Ini Dima-Okojie and Bollywood actor Ruslaan Mumtaz, the romance follows the story of lovers who try and finally succeed in getting their families to let love prevail over race and culture at least that is what the best part of the story sells.

For a film paraded as ambitious and anticipated for so long, its post-production is back alley standard. It goes through the whole nine yards of flops from horrific sound to underwhelming editing and chaotic directing.

‘Namaste Wahala’ kicks off with the would-be lovers bumping into each. No sooner than we can blink, the lovebirds are dancing Bollywood style- a way of ushering the audience into its major conflict, assuming we are already over two total strangers who are now suddenly madly, deeply and blindly in love.

At the very least, chemistry is a must-have for every romance but it is tragically absent with the ‘Namaste Wahala’ duo. Watching pigeons peck is guaranteed to elicit a more genuine awww effect than watching them go over which parent likes what.

Like wading through the ruckus of an Igbo murdering Richard Mofe Damijo is not nerve-racking enough, the movie double doses with Osas Ighodaro‘s character, a prima-donna with a terrible knack for pissing on everything including the simple role of being a formidable villain. With this character, the actress is not the problem. Ighodaro manages to wing it just fine. Unfortunately, it is a character she should have no business playing.

One aspect of ‘Namaste Wahala’ that probably works is the lofty ambition of its director opting safely for a romantic comedy. With directing, Ahuja is just as good as a poorly advised first-timer letting the actors and everyone else run free. It is the chaos that knocks one out cold.

‘Namaste Wahala’ is showing on Netflix.