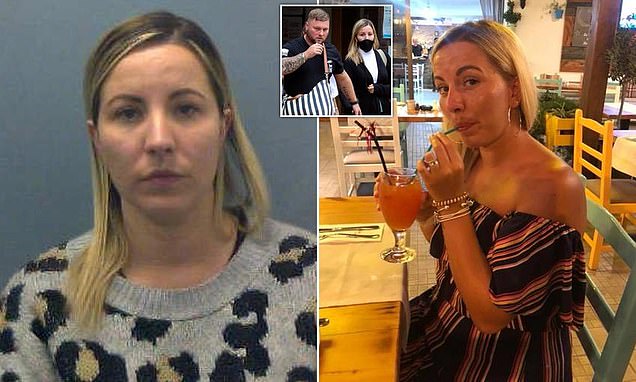 A judge today blasted a ‘beyond despicable’ teacher who had outdoor sex with her 15-year-old pupil as she was jailed for six years and two months.

Married mother-of-three Kandice Barber, 35, took the underage boy to a field, kissed him on the neck next to a bale of hay and whispered, ‘What do you want to do now?’ before having full intercourse with him.

The Princes Risborough School supply teacher from Wendover, Buckinghamshire, even sent him nude images of herself and later threatened to ‘take him down’ if he told senior staff about their illicit sex encounters.

Barber’s lawyer had claimed that at just 5ft tall, she was too short to have had sex with the pupil, who cannot be named for legal reasons, standing up.

The defendant also lied that her packed calendar meant she was ‘too busy’ to have slept with the pupil, who today said the ordeal had impacted his GCSE results.

Jailing her at Aylesbury Crown Court today, Recorder Bal Dhaliwal said Barber had ‘acted in gross breach of trust’ and had taken ‘advantage of a child in your care and groomed him for your own sexual gratification’.

She told the teacher: ‘The victim was a 15-year-old boy in his final year at school. You had control and authority over him. He felt drawn in by you due to the compliments, you caused him to engage in sex with you while he was a pupil in your care.

‘You threatened to take him down with you if he reported it. You already had authority over him by virtue of your position but to use threats is beyond despicable.’

Barber had bombarded the then 15-year-old pupil with messages, including one where she asked him ‘do you like boobs or bum?’ – and sent him a photo of herself on a bed surrounded by sex toys.

But she was found out after a topless picture she had sent her victim was circulated around so much it ended up being passed to the headteacher of their school. The supply teacher was found guilty of one count of causing or inciting a child under 16 to engage in sexual activity. She was found not guilty of two further counts of the same charge.