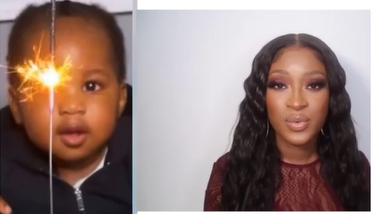 Yasmin Larissa Lorenco, singer Davido’s alleged fourth baby mama, has disclosed how she met the father of her son, Dawson.

In a Q&A session with her followers, Yasmin, who is an Angolan, said she met Dawson’s father while she was working as a makeup artist.

”We met four years ago. I was working as a makeup artist. That is where we first met” she said while responding to a question on how she met her baby daddy

Yasmin revealed that life as a mum has been challenging as she has had to sell personal items just to generate income.

Davido is yet to confirm or deny the rumor that the boy, Dawson is his. On Tuesday, March 23, Yasmin revealed Dawson’s face to mark his 1st birthday and many of the commenters said he had a striking resemblance with Davido and his second daughter, Hailey.

Yasmin is yet to publicly reveal who her baby daddy is.

Watch a clip from the Q$A session Yasmin had with her followers below..

Teddy A replies a troll who doesn’t understand English