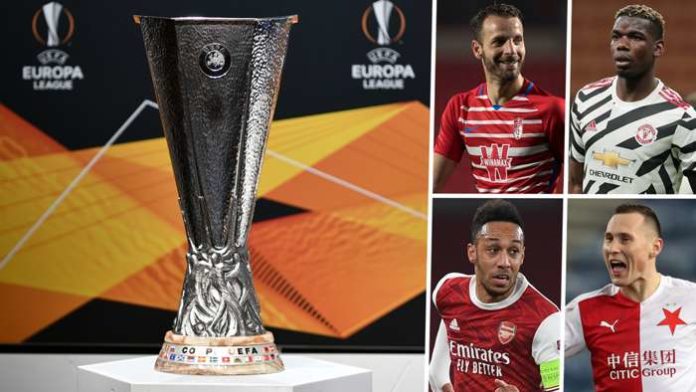 Manchester United have been drawn to face La Liga side Granada in the quarter-finals of the Europa League, while Arsenal will take on Slavia Prague.

United, who overcame AC Milan 2-1 on aggregate in the round of 16, will face the Spanish club in the last eight, while the Gunners are up against the Czech outfit who saw off Leicester City and Rangers in previous rounds.

Ajax play Roma, and Dinamo Zagreb have been drawn against Villarreal in the other quarter-final match-ups.

What are Man Utd and Arsenal’s paths to the final?

If United overcome Granada in the quarter-finals, they will play the winners of the tie between Ajax and Roma.

The victors from Arsenal versus Slavia Prague play either Unai Emery’s Villarreal or Zagreb, who stunned Tottenham in the last 16 with a comeback 3-2 aggregate win – meaning an all-Premier League final is possible.

Will the English clubs be happy with their draws?

United are viewed by many as favourites for the Europa League, thanks to their ample firepower provided by Paul Pogba – who scored the second-leg winner in Milan – Bruno Fernandes, Marcus Rashford, Edinson Cavani and more.

Arsenal, meanwhile, will have to be wary of a Slavia Prague side who have proved adept at eliminating British opposition – they beat Leicester 2-0 on aggregate in the round of 32 before seeing off Rangers at Ibrox to triumph 3-1 over two legs.

Should Mikel Arteta’s men progress, they might play Villarreal in the last four. The Liga side are managed by former Gunners boss Emery, who was sacked in December 2019 and replaced by Arteta.