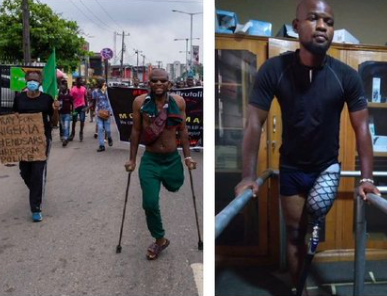 Popular Nigerian medical personnel on Twitter, Aproko Doctor, has reacted to an accusation levelled against him by the lawyer of a man who he and others promised to purchase a prosthetic leg for.

Recall that during the #EndSARS protest in October 2020, the photo of a specially-enabled man went viral after he participated in the protest. Shortly after, Aproko Doctor and others began a campaign for Nigerians to contribute money to purchase a prosthetic for the man.

In a tweet thread this evening, Aproko Doctor, said he received a call from a man who claimed to be the lawyer of the specially enabled man, accusing him of not fulfilling the promise to procure a prosthetic leg for his client despite gathering donations from many Nigerians. This came as a surprise to the doctor and he came on Twitter to make some clarifications.

”I didn’t want to do this, but after careful thought, I decided this is the best way forward. We raise money publicly and it’s best you know about this. You remember the guy we got a prosthetic leg for asides Jane during the #EndSARS protests? I got a call from a lawyer Stating that he represents him and he claims that he had neither received the leg or money but we had gone ahead to publish that he had gotten the leg and the total sum of 217,000 naira to help him kick-start his life. Naturally, this came as a shock to me.

I called Bayo who helped me source and assembled this leg for him FREE OF CHARGE to please confirm, as I currently have videos on my phone of this same person doing gait training with the same prosthetic leg. He confirmed that the beneficiary passed his gait training.

Now this is where things get interesting, He didn’t come back to pick the leg, even after getting the cash gift that was an overflow of the donations, a total of 217,000 naira. Despite calls from Bayo for him to come pick his leg up. 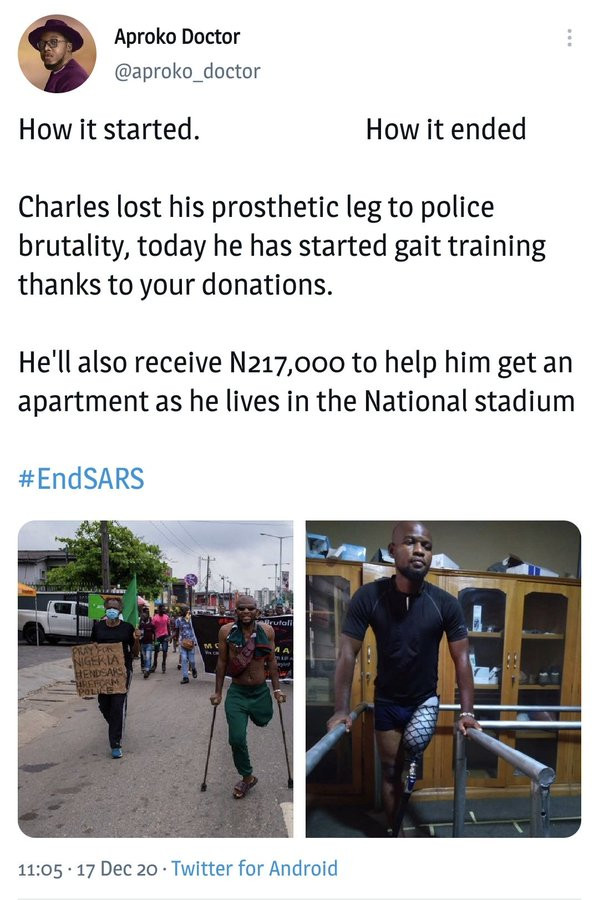 He rather asked @Bayo_Ojelabi  to sell the prosthetic leg and give him the money instead, stating he had some money needs more important than the leg Bayo declined saying that people trusted us to give him a leg and that’s what we will do Apparently he tried to do this behind me

Getting a lawyer, just because things didn’t go the way you wanted felt like a betrayal despite all the effort Bayo, his team and I expended in ensuring that he got the best leg possible I’m doing this to keep you abreast of stuff. You trust me to use your funds judiciously.

Most of what we do is effort intensive, we simply want to make a difference in as many lives as possible with as little funds as we can. Imagine if he had gone to the blogs? A project based on trust would have been dealt a massive blow because someone was selfish.

People are different, this doesn’t stop us from helping other people, but please know: GOING FORWARD WE WILL NOT PAY MONEY INTO PERSONAL ACCOUNTS, WE WILL PAY DIRECTLY TO THE HOSPITAL OR PHARMACY OR HEALTH BODY TAKING CARE OF YOU People have been trying so hard to defraud us.

Making our processes harder, having to personally verify cases which takes effort and time, ALL DONE BY VOLUNTEERS. Cost of doing this is carried by the volunteers themselves. It’s hard work, we want to help. And we will.

I had to tell you this, before someone makes an unfounded claim on one of the gossip blogs, or handles around and people run around without knowing the truth. This doesn’t stop us one bit, however, some restrategizing is needed. We will still support Nigerians in need Thank you” 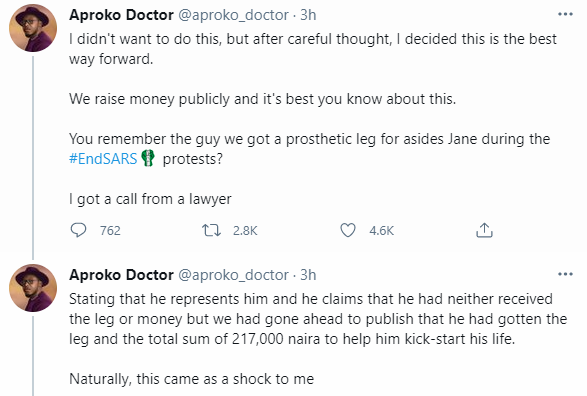 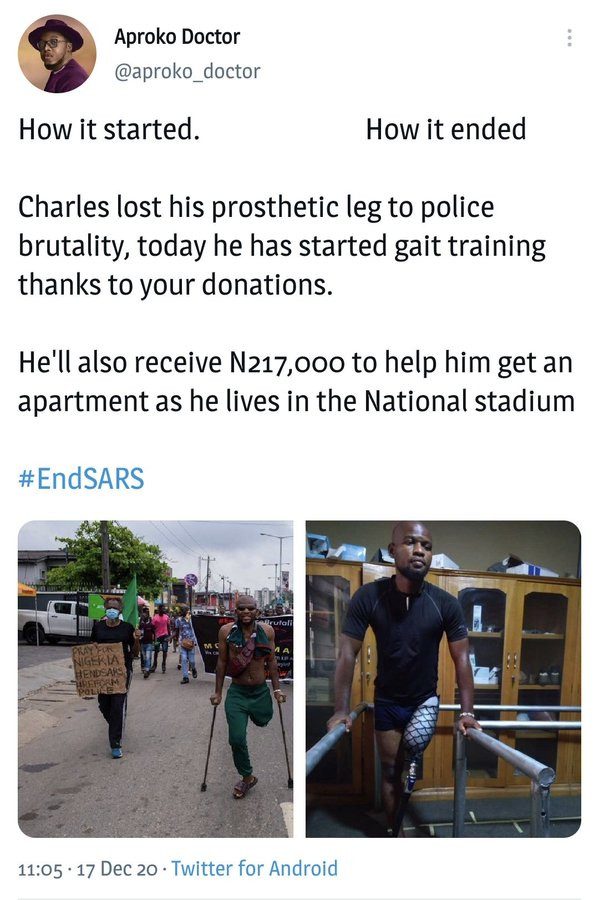