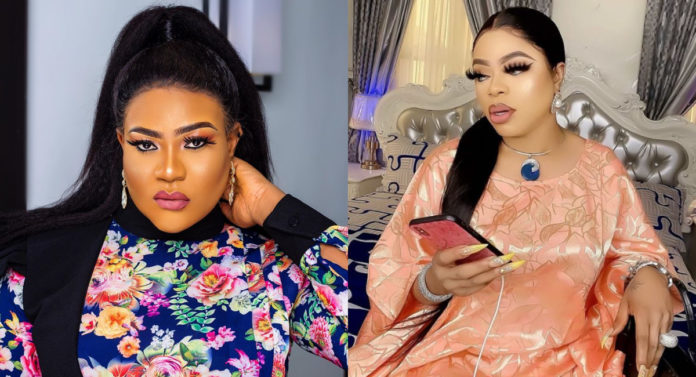 A lot of reactions followed after a video of Nollywood actress Nkechi Blessing and Nigerian crossdresser Bobrisky surfaced online.

The both of them were spotted chilling together at a party in Lagos, weeks after they were both involved in a fight.

Some weeks ago, Nkechi Blessing and Bobrisky engaged in an heated exchange of words on Instagram, calling each other unprintable names and revealing dirty secrets about themselves.

Below is the videos of the duo chilling together at a party:

Bobrisky and Nkechi Blessing’s beef over? They were spotted chilling at a party in Lagos pic.twitter.com/Ob5A7cAWea

@ada_bek: Don’t mind these yeyebrities… Na the so called fans we go carry their matter for head I pity… After all the scam they go cash out…

@DimejiEgbeyemi: You knw say if dem fight for there Bobrisky make up go wash away Nkechi fit kick his balls na there gobe go start.

@aprokoqueen: The world will be a better place if every other ashewos can be like this, u fight, small time u settle. P for period.

@cruisenaija1: They both have celebrities as close friends, and they might have settled it for them.

‘The Past Few Weeks Have Been Very Difficult’ – D’banj Writes...