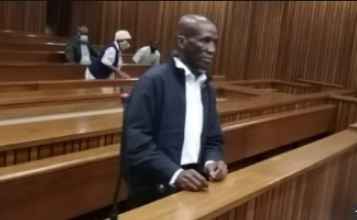 A South African man who claimed to have been haunted by the spirit of his girlfriend he murdered more than 20 years ago has been sentenced to life imprisonment.

Collins Lucky Maduane, now aged 52, was sentenced at the high court in Pretoria this week.

He was 31 years old when he strangled Florah Mahlo to death at his Soshanguve home. She was 25.

On the night of September 3 1999, neighbours had heard Mahlo’s screams coming from Maduane’s home. The next morning when they asked about Mahlo’s whereabouts, he claimed she was away, visiting relatives in Johannesburg.

In the year 2000, while Maduane was detained in Bavianspoort Maximum Prison serving a 12-year sentence for attempted murder in another case, he was haunted by Mahlo’s spirit. He then called his sister and confessed, said National Prosecuting Authority (NPA) spokesperson Lumka Mahanjana.

He explained in detail how on that fateful night, he had strangled her, then dragged her body to a nearby bush where he set it alight.

“The following day, he went to where he burnt the body and discovered that it was not completely burnt. He then decided to chop the body into two halves. He chopped the bottom part and threw it in the nearby drain. He then buried the remaining parts,” said Mahanjana.

Seven years after confessing to his sister, Maduane felt the need to also inform Mahlo’s family. He asked to meet her mother but suddenly backed out.

Twelve years later, in 2019, the matter again came up. A fight broke out between Maduane and his niece and his sister was called. When the sister arrived, she found that he was still very emotional and uncontrollably angry.

“Maduane’s sister called a friend and when the friend arrived, she asked why he was always fighting. He asked them to switch off their phones before he spoke. The sister pretended to have switched off her phone and recorded everything,” said Mahanjana.

He told them that he was stressed because since Mahlo passed on, she is troubling him. He confessed. He said he wanted to take them to where he killed her.

Maduane, who had previously spent time behind bars for attempted murder, was then rearrested.

Two years later, the court finalised his case – more than two decades after the murder.

“The court believed that Maduane was indeed haunted by the spirit of the deceased because he had successfully evaded justice for years,” said Mahanjana.

He was handed a life sentence for the murder.

Ekiti State University staff who defiled his daughter for 3 years...