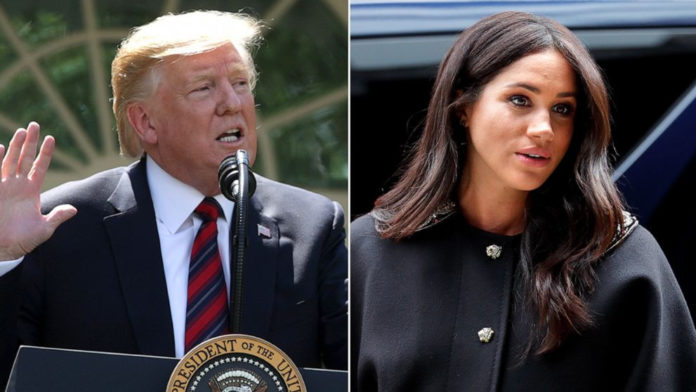 Former US President, Donald Trump has said that he could face the cancel culture “like Piers” if he publicly comments on the Meghan Markle and Prince Harry interview.

Mr Miller said that the former president told him he could “make a little news” by telling the public his thoughts about the Oprah interview with Meghan and Prince Harry that included several bombshell revelations about life as royals.

Mr Miller said when recounting the conversation with Mr Trump;

“When I was talking to the president this morning … he’s like, ‘Yeah, she’s no good. I said that and now everybody’s seeing it. But you realise if you say anything negative about Meghan Markle you get cancelled. Look at Piers.”

Trump was referring to Piers Morgan, the polarising host of Good Morning Britain who left his job after he said during a segment that he didn’t believe a word Meghan said in the Oprah interview, including her struggle with suicidal thoughts.

Following the admission and a series of complaints to ITV, including a formal one submitted by Meghan, it was announced that Mr Morgan had left the morning show.

Mr Trump had previously called Meghan “nasty” when asked about comments made by the Duchess of Sussex that referred to him as “misogynistic” and “divisive”.