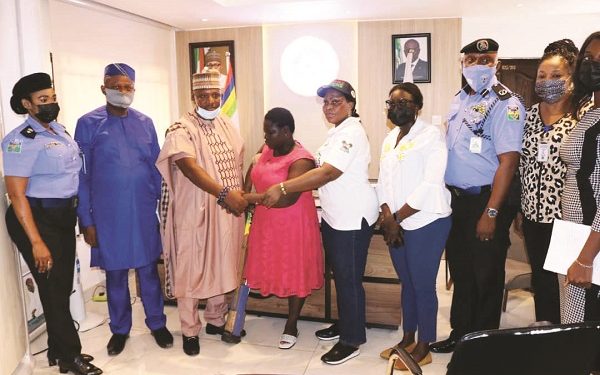 If not for family members and others who wanted their share of the cash donations, amputee sachet water hawker Mary Daniel’s lies would not have been exposed.

Miss Daniel claimed that her parents were dead, but some of her relatives seeking a share of the over N25m donated to her by Nigerians, said she lied.

The 26-year-old also did not say the truth about being an orphan.

A source close to the Lagos State government told The Nation that “some of these discrepancies started emerging on her birthday. Some things were observed that did not add up. Then, the strange calls. She also refused for her child to be brought to Lagos”.

The source added: “Later she came up and said she wanted to go alone to bring the child and those managing her refused since it was not safe to travel. Then, she was taken to where she should learn a skill but she refused. It was clear she just wanted to leave the state. With the information at the disposal of the state government, she was disallowed from travelling alone.

“She was first handed over to the Social Welfare Department but when they complained about accommodation and the Igala traditional ruler in Lagos indicated interest to take her, she was handed over to him.”

When The Nation contacted the leader of Igala community in Lagos State, Chief Sanni Yakubu Ejima, he confirmed that Miss Daniel was in his custody.

The Special Adviser, Office of Civic Engagement, Princess Aderemi Adebowale, in a statement yesterday, said Miss Daniel was kept in protective custody to shield her from possible fraudsters, adding that the ultimate desire of government was to ensure she became a responsible citizen.

According to Adebowale, “she now has the resources to take care of herself and her baby. She can now have a new lease of life”.

She explained that the police were brought in to demonstrate that the state had taken good care of Ms. Daniel while its officials and to ensure her safety thereafter.

Princess Adebowale added that a committee would oversee Miss Daniel’s rehabilitation and ensure that the donated funds were judiciously utilised for the improvement of her standard of living.

Commissioner for Information and Strategy Gbenga Omotoso denied that the state was preventing Ms. Daniel from accessing her money.

He said: “We have handed over Mary Daniel to representatives of her Igala, Kogi State community here in Lagos. The handing over was done in the presence of representatives of the Ministries of Justice; Youth and Social Development, and police and a Non-Governmental Organisation.

“Government took the step to shield Ms. Daniel from possible fraudsters who may target the funds donated to her by well-meaning Nigerians. She is also free to set up her dream supermarket in Lagos since it was here that fortune smiled on her. This is a confirmation that Lagos is a land of hope and opportunities. A committee was also set up to ensure the funds are utilised judiciously.”