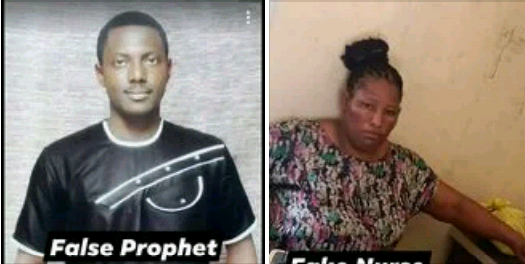 Human rights activist, Comrade Israel Joe, has disclosed the identities of the prophet and his female accomplice accused of stealing a newborn baby in Warri, Delta state.

We reported that Comrade Israel Joe accused the duo now identified as Ogaga Anthony Jeda and Chukwuedo Princess Priscilla, of taking a newborn away from the mother shortly after delivery. 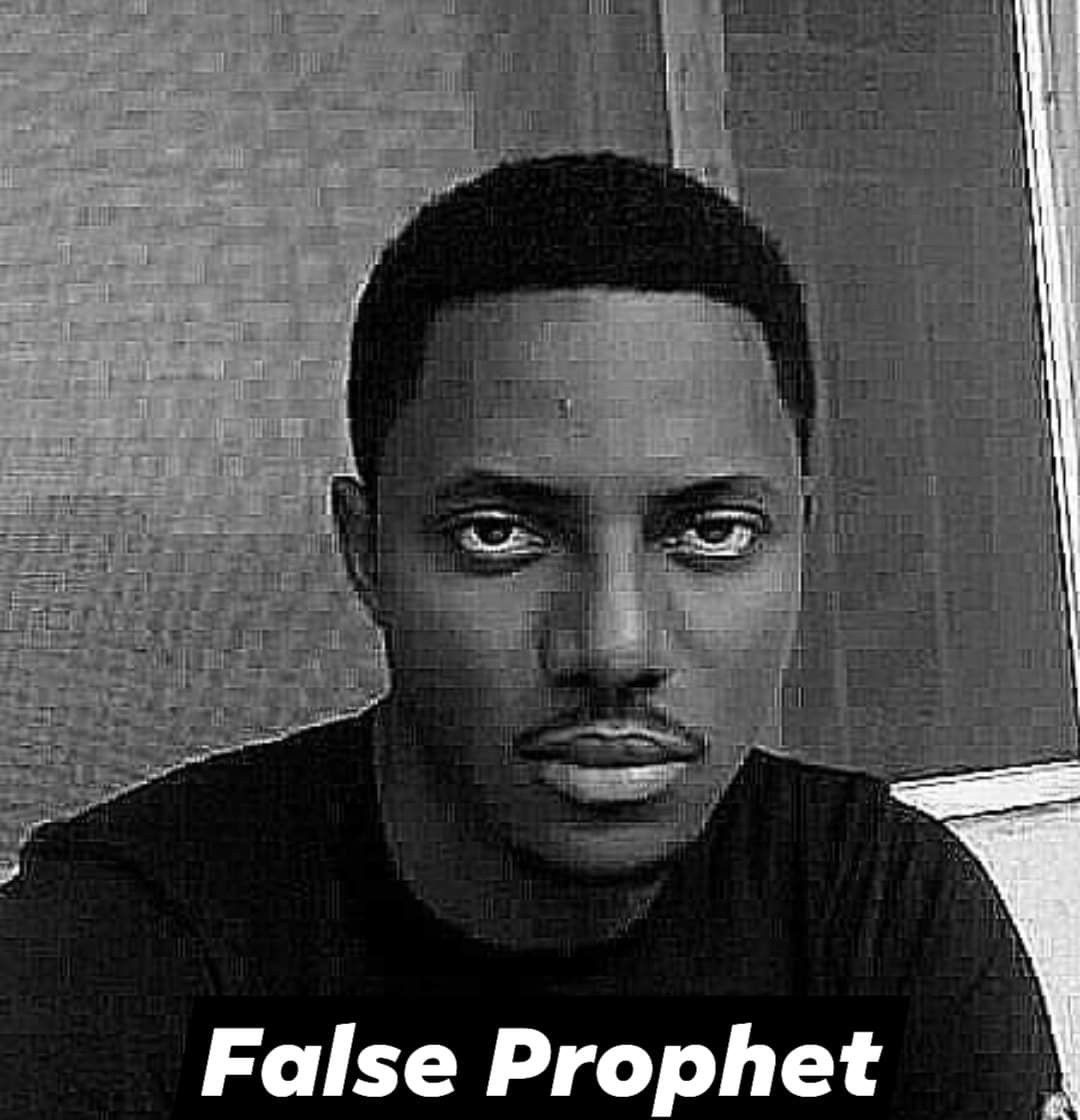 In an update on Wednesday, April 21, Comrade Joe said that the  alleged ‘false’ prophet and the fake nurse admitted that the woman gave birth to a baby at an orphanage home on April 15, 2021 but refused to disclose the whereabouts of the child.

In a post I made two days ago, I had given an alleged False Prophet along with his accomplice (a fake nurse) 48 hours ultimatum to provide the child who was given birth to, at a quack centre.

The lady and the prophet has confessed to the police that the woman really gave birth to the child in Potter’s Orphanage along 3rd Marine gate/Oil field Link road. At this point we have to state the facts at our disposal. 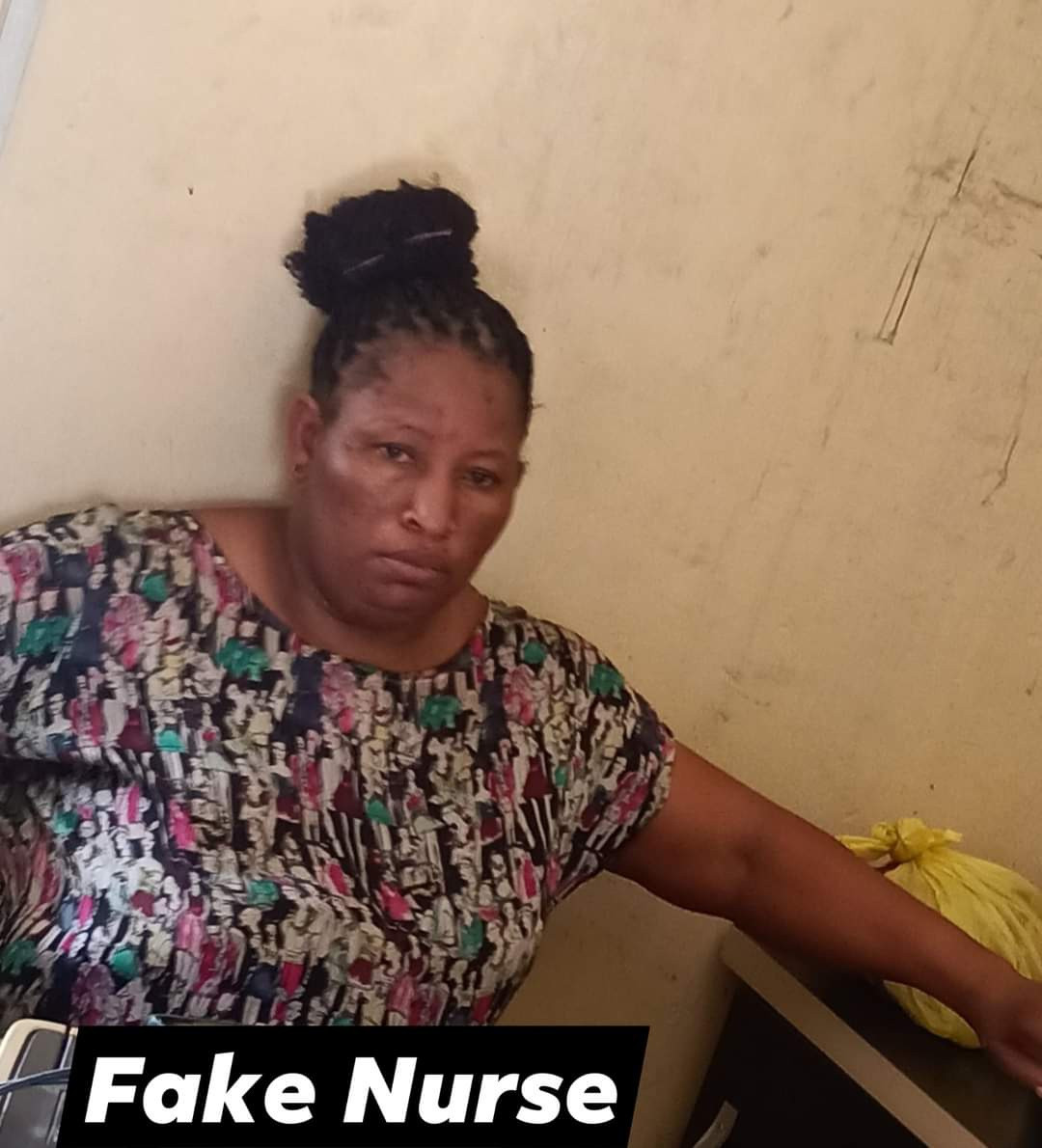 The prophet and the woman has refused to disclose the whereabout of the child. The child was birthed on Tuesday the 15th of April, this year. The husband to the woman who has the orphanage home where the child was birthed is a Senior Advocate of Nigeria (SAN) and has threatened to take up the police and ourselves. We are waiting for his court suit because disgrace awaits him. 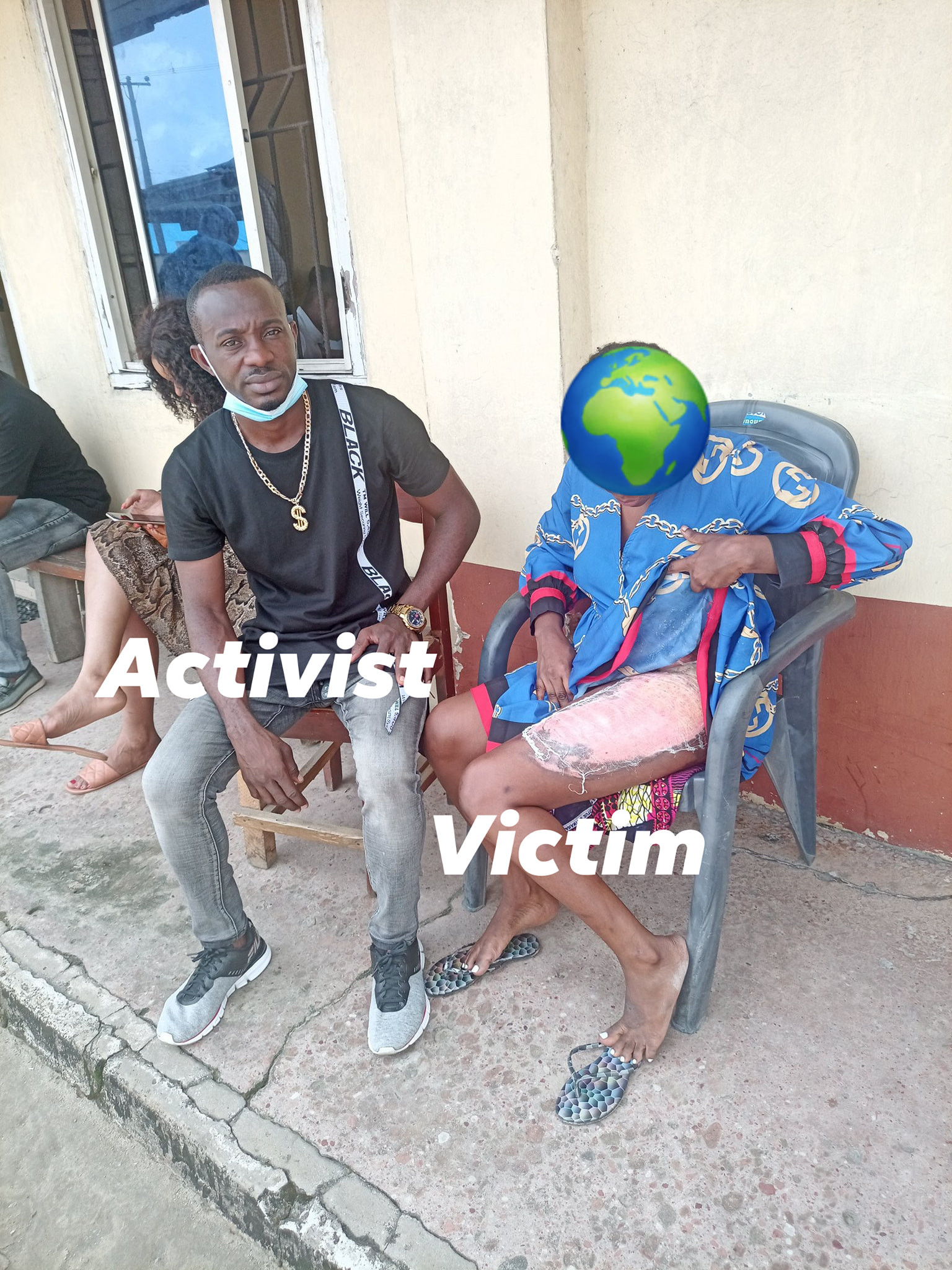 The child according the information available to us has been sold by the False prophet and the fake nurse. The name of the False Prophet is Ogaga Anthony Jeda with phone number 08154683553 while the name of the fake nurse is Chukwuedo Princess Priscilla with phone number 07031101266. The owner of the Orphanage home where the woman delivered the baby has not been arrested by the police.

The false prophet and fake nurse had before the selling of the child defrauded the father of the missing child to the tune of 2million naira through frivolous prophesies and hypnotization. He had told the father and his wife never to tell anyone about the prayers being conducted on them because their enemies would die in few days not knowing they were targeting to sell their unborn child.

I can’t understand such appeal when they haven’t told us the whereabout of the child. We want to appeal to the police that extreme measures should be used against them, to compare them, into speaking out about the child’s whereabout, since peaceful questioning has failed. If they sold the child to a politician or others for ritual purpose or for adoption, we wish to know.

Depression has taken over the victim who poured hot water on herself because of the pain of child’s disappearance. Attached to this write-up is the picture of the victim and Comrade Israel Joe.

We hereby call on the Delta State Governor, the Inspector General of Police, AIG Zone 5, Commissioner of Police, Area Commander Warri and all well meaning Nigerians never to take this case with trivial levity. Any attempt or pressure to frustrate and sweep this matter under the carpet would meet a very strong resistance. 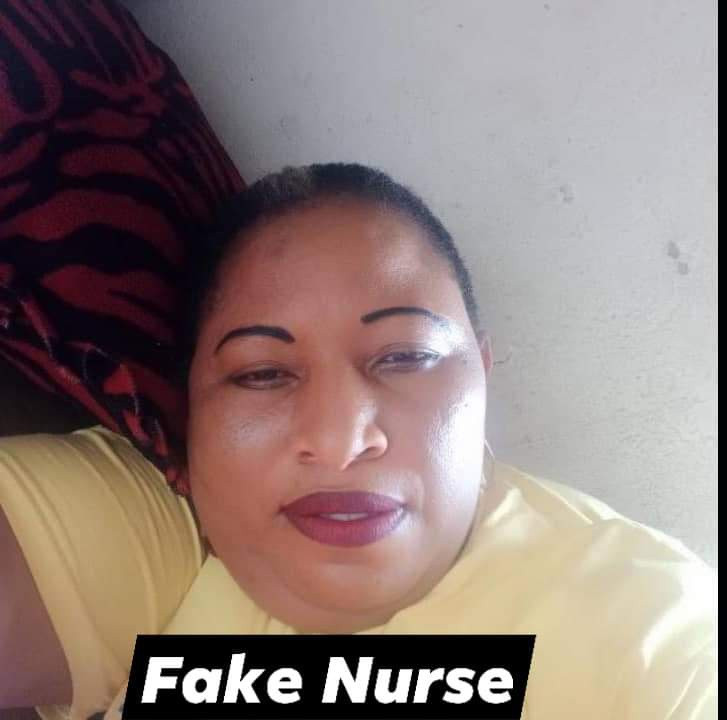 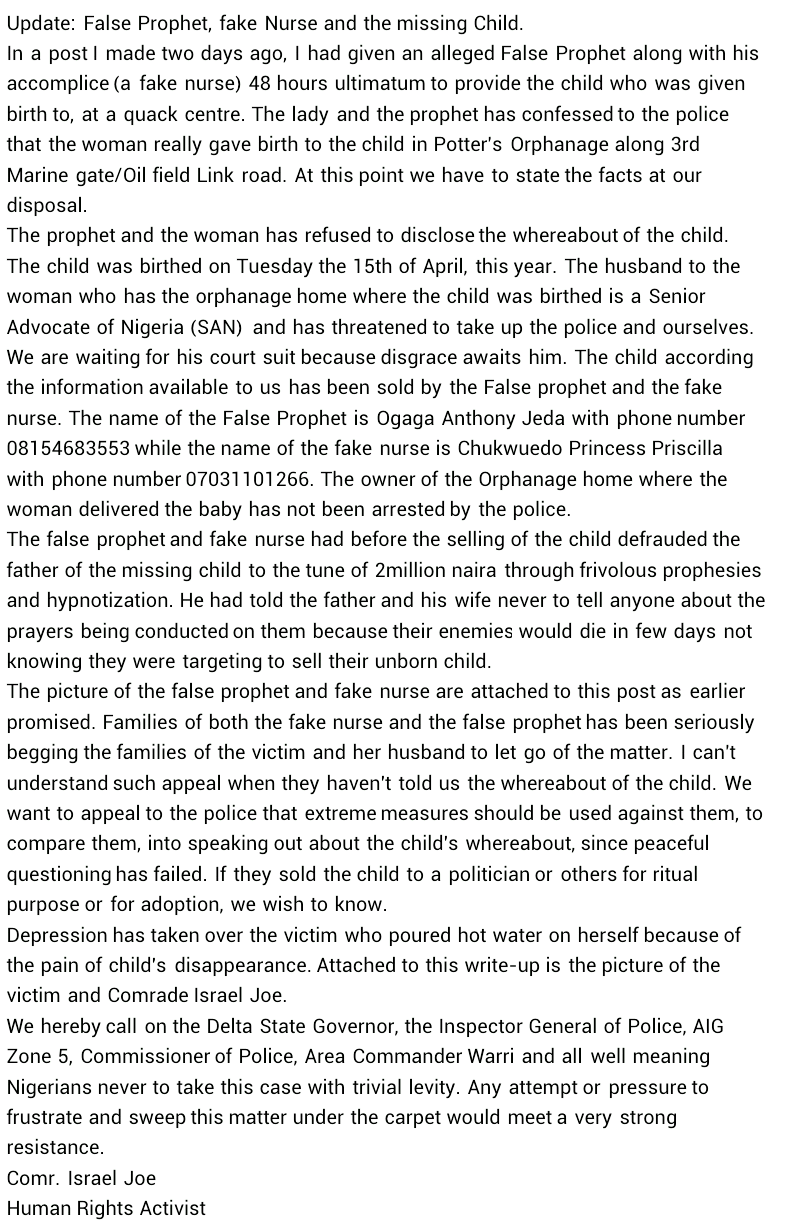 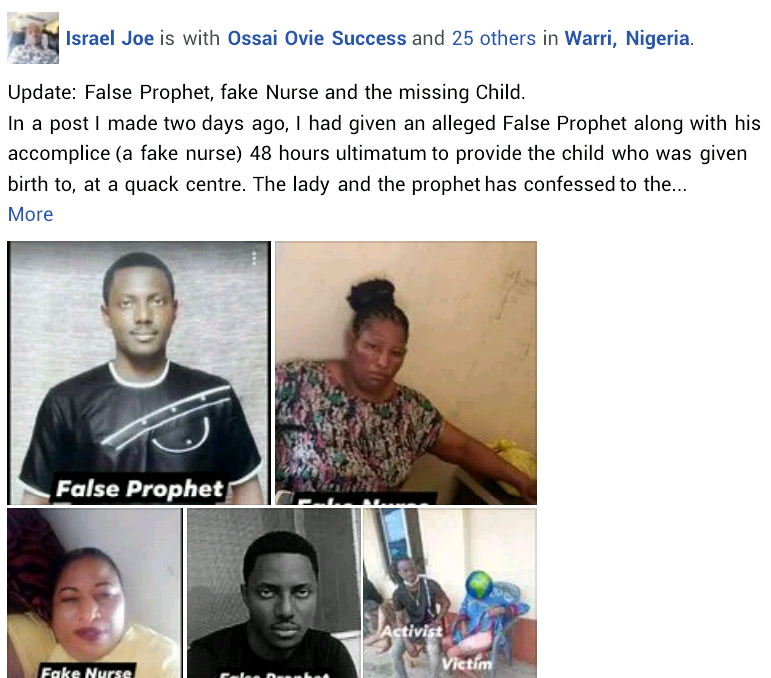 Pay N2m or have your family wiped out – Youths threaten...