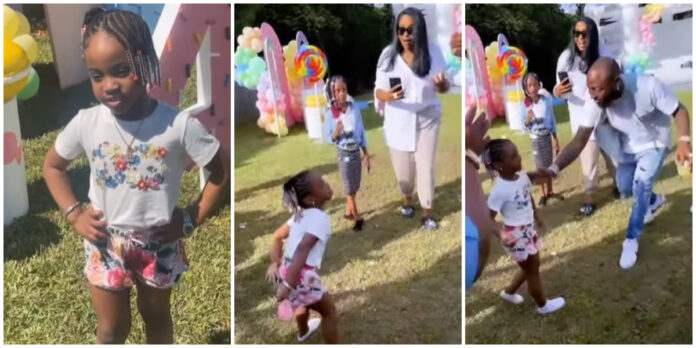 A video snippet has surfaced online which shows iconic singer, Davido, cautioning his second child, Hailey, against twerking. At a party, the little girl wanted to show off her dancing skills to onlookers as she assumed the ‘twerking position’.

Her superstar father hurriedly stopped her by taping her lightly on her shoulder. However, the Fem singer’s action has drawn several reactions on social media especially on Twitter.

Babajide Blunt via his handle @CRawkeen tweeted that the singer has a double standard. He said Davido can watch other people’s daughter twerk but would not allow his daughter to do the same.

He tweeted, “I saw the video where Davido’s daughter Hailey was trying to twerk and he quickly cautioned her ‘hey don’t do that, don’t do that, that is for àwọn ọmọ wobe not for good girls’ It’s sweet to watch other people’s daughter twerk but not your own child.”(sic)

He tweeted, “Hahahaha he can’t stand his daughter doing what he enjoys seeing other people’s daughters do. A father’s love is priceless.”

IamSojay lauded the singer’s parenting skills via his handle @iam_sojay noting that some parents will just laugh off the little girl’s action.

“Lesson of the day: Davido smacked her. African style of raising children. Yet we have parents who will just laugh it off… and won’t caution it,” he tweeted.

@hambog004 also gave the singer thumbs up for his parenting skills as he tweeted, “Good job @davido… You raise ur child as u love to see her… it’s never ur duty to teach other children but their parents.”(sic)