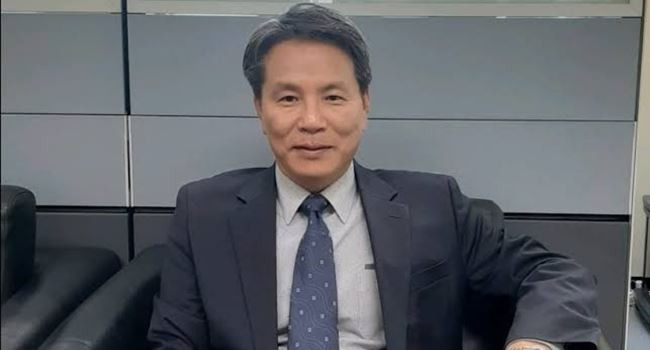 South Korea’s Ambassador to Nigeria, Kim Young-Chae has described the country’s security crisis as an “internal issue” which should be discussed among Nigerians.

Chae who have the advice in Abuja said if another country engages Nigeria, it would then be considered an international issue.

He added that to solve the current bedeviling the country, Nigeria needs international cooperation mainly with its neighbouring countries to enhance its internal security.

“Security is a very sensitive issue. I know everyone is concerned about the insecurity in Nigeria but it is Nigeria’s internal issue. It should be discussed among Nigerians. If another country engages Nigeria, that is another issue entirely and that would be considered an international issue. To solve the problem, Nigeria needs international cooperation mainly with its neighbouring countries to enhance its internal security. Nigeria must cooperate with Chad, Niger and other neighbouring countries to ensure cooperation.”

Calling for professionalism in the army, Chae described the Army as the centre that holds the society together.?

“In South Korea, we have a very strong defence which is rated number six in the world. The military is very dedicated and there is little or no corruption in the system. The military is the centre that holds the country together. If the military is corrupt, there is a high possibility that the whole country will be corrupt. Discipline and dedication are key in building a stable and efficient military.”?

Revealing that Nigeria and South Korea are on the verge of sealing a defence and intelligence-sharing pact, Chae said they’ve established the office of a defence attaché in its embassy to strengthen cooperation between the two nations.?